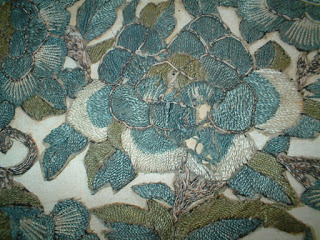 Looks as if the poetry pamphlet is going ahead. Waiting to get ISBN numbers. Waiting, and waiting and waiting. My life is spent waiting for people to make up their minds and do things. Meanwhile the printer called to say that he liked the photos which I was hoping to use on the cover. Seemed, in fact, extremely taken with them. This surprises me, since I'm a bit of a hit and miss photographer. Know zilch about the techie side, just point the digital camera and press the buttons. It's a close-up of an old piece of embroidery - Chinese I think. A bit ragged around the edges, which seems to me to be a good enough image for the poems too. Here's a bit of it.
Meanwhile, finally managed to speak to David McLennan by phone. I sent him a draft of a 'solicited' play, a potential Oran Mor play, many months ago, but haven't heard a thing since. He was, predictably, very busy. (This is true. The poor man is constantly busy, and constantly harrassed by playwrights, like me.) He promised faithfully that he would call me back in the middle of the afternoon. I waited in, specially. The phone never rang. Then, much later in the day, I realised that there had, in fact, been a problem with my phone itself. Aaaargh. I have missed my one window of opportunity, and I reckon it will never ever come again.
Later still, realise that this new season of Oran Mor plays includes one by my bete noir of last year, Tom Tabori. Shall I (a) go and see the play and heckle from the back (b) go and see the play and give it the same glowing - in the inflammatory sense - review as he gave mine or (c) ignore it completely? Of course I could go and enjoy it. There is always that possibility.
There is definitely too much seriousness going on at the moment.
We are writers. We make stuff up. That's about it. It is by no means a matter of life and death.
My horoscope for this month was astronomically excellent, but I see little evidence of it in the real world. Well, not as far as my career goes anyway. Perhaps it means something else altogether!