The Urban Crow Plays in Traffic 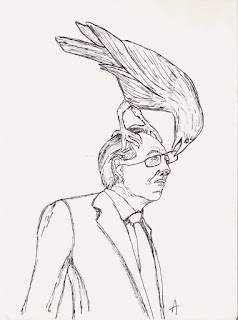 The urban crow sits on some stone hero’s head
watching folk pass below.
He briefly contemplates tweaking off a pair of specs
or alighting on a bald patch or
dicing with death among cars where
a drunk has dropped a takeaway
but decides it would be more prudent to
make for the park where there will be
kids with ice cream cones or popcorn.
He can con popcorn from an infant nae bother
with a wee stare from his beady eye
but he treads carefully.
See they buses, says the urban crow,
they’d run you down as soon as look at you.