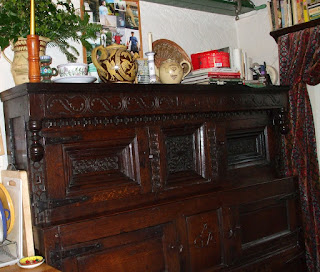 What, in the name of all that's holy, possessed the powers that be at BBC Radio 4 to schedule a dark psycho-sexual drama as the afternoon play on the saturday before Christmas, for God's sake. So there I am standing in the kitchen, mixing a (late) Christmas pudding and slapping white icing on my cake - a big snowball, as usual, don't go for the fancy stuff. I love my kitchen at this time of year. It smells of oranges and vanilla and coffee and the light gleams off the ancient oak press cupboard that has swallowed everything from bread flour to salted peanuts in preparation for the entertaining ahead. He always comes into his own at Christmas - the cupboard I mean. He goes by the name of George, because I have the distinct feeling that he was made for somebody of that name, almost 400 years ago. A marriage piece, and one of the initials is G. I found myself giving him a therapeutic polish this morning as I so very often do. He pays for polishing and whenever you open one of the cupboard doors the fabulous smell of old beeswax floods out.
Yes folks, I'm in love with my cupboard.
But there I was, working away, and I switched on the radio expecting, ooh, I don't know, something Christmassy, or at the very least something spooky, to find myself being warned about the psycho sexual content of a worthy play about Melanie Klein. The effect it had on me was the one my old radio drama producer used to call the 'Shit Click' effect. You know. When you listen for a couple of minutes, say 'Shit!' and reach for the off button.
I put on some music instead, and stirred up my pudding with a will. But has Radio 4 taken leave of its senses, or what?