Burns on the Solway Now on Kindle 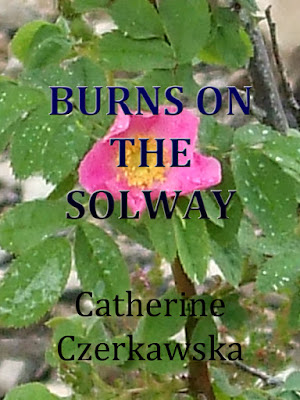 I've just uploaded my play Burns on the Solway to Kindle (with extreme difficulty, I might add, so if you buy it, please forgive any formatting glitches!  Plays are much harder than novels to format!) It was staged at the Oran Mor in Glasgow, and is a play about the last few weeks of Robert Burns' life, down on the Solway Coast of Dumfries and Galloway. I remember clearly when I first had the idea for this play although it was many years before I wrote it and even more years before the actual production.
We were camping on the shores of Loch Ken, as we used to do every summer when the village kids were young, going off in a huge group (sometimes as many as 50 adults, kids and dogs. We used to tell the police that we were all going to be away!) to camp and go canoeing and boating. The kids, all grown-up now, still remember it as a magical time. The adults all remember it as fairly magical too, although we also remember the extreme cold, on occasions, and the thunder-storms and the mud and the endless barbecues. But on the whole, it was wonderful.
It was on one of these trips that - since son, husband, and others were out on the lake - I took myself off in the car, alone,  to a place called Brow Well on the Solway, which was the 'poor man's spa' to which the seriously ill poet was sent by his doctors, and advised to go 'sea-bathing' in an effort to find a cure for what may have been a terminal heart condition, although there are still debates about the cause of his death. It doesn't look as if it has changed much in all the years since, a simple, picturesque place with a chalybeate spring, and a few cottages. From there, it's a short walk down to the coast, where the mud flats stretch to infinity and there is a wild rock garden fringing the whole place with big clumps of pink thrift, rustling in the breeze, and other small flowers clinging to the edges of the land. A deeply atmospheric and evocative place. And I was there at the same time of year - July, when the thrift was dying.
Not hard to imagine the poet here. And then you realise, with a shock, just what 'seabathing' must have entailed. The water is wide and shallow and for him to wade until he was waist high must have entailed a terrible struggle through cold water. He was still a young man, his wife Jean was about to go into labour with his last child, he was terminally ill and he was totally poverty stricken, with people pursuing him for unpaid debts. A few weeks later, after his death, he was already being lauded as The Bard and people had descended on poor Jean in ravening hordes, begging for manuscripts, anything written in the poet's hand. Ghoulish souvenir hunting is not a modern phenomenon.
This is what the play is about, as well as everything that lead up to it. There are only three characters: Burns, played by Donald Pirie, looking and sounding and  being as like the poet as it was possible to be - uncanny really - an equally superb Clare Waugh as Jean, and Celine Donoghue as the musician, weaving her sinuous way between the two of them, playing a variety of instruments perfectly.
It was a lovely, well reviewed production and a totally happy process, directed by Michael Emans.
I have more writing on this theme planned - a couple of novels which are gnawing away at my imagination as these things have a habit of doing - but I can't imagine myself making a start on the first of them until next year. We'll see. Perhaps another visit to Brow Well will be needed. I love the poems and - in particular - the songs of Robert Burns and find myself coming back to the work and the man, as well as the women in his life, time after time. So perhaps it is time for me to tackle something longer on the subject.
Dumfries and Galloway Jean Armour plays Robert Burns Solway Coast