November 17, 2011
I've spent a bit of time recently, helping my clever son to edit his own first publication for Kindle, a  career guide about breaking into video games design. He has always been keen on writing - and very good at it, I think - but then I would say that, wouldn't I? This isn't a big book, but I do think it's one that could be very useful for any young person who thinks he or she might want to work in the games industry. 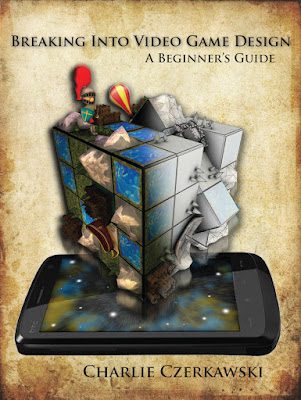 For years, Charles has known that he wanted to work in video games. As a very young child, he was always drawing and colouring in what came to be known in this family as his 'disasters': pictures full of 'happenings' - usually pretty disastrous ones! People would come into our kitchen and look at all these drawings pinned up on the wall and say 'well - er- yes!'  For a while, we thought he might want to study art, but it didn't turn out that way. Instead, he did an honours maths degree. He had always been mad about board games, games of all kinds really. Every careers advisor he had ever spoken to had said that he would need to be a demon programmer, but when he did two years of computer science at Glasgow University, he found out that he didn't enjoy it much! None of this dampened his interest in games though.

After graduation (and a few months as a kitchen porter) he worked in the games industry for a couple of years - including a spell with Rockstar - on short Quality Assurance contracts, getting his name on several major titles in the process. Then he was accepted onto a postgraduate masters course in Video Game Development at the University of Abertay in Dundee - a course about which he speaks very highly indeed. Now, he and three colleagues from that course have set up their own development studio, called Guerilla Tea - also in Dundee.

As he would say himself, he knew what he wanted to do and to be - just didn't know what that job was called.  Design, in video games, involves not just coming up with ideas (although that's a part of it)  but making the game itself work as a game. He tells me he uses his maths and his QA experience a lot. Also all those years of creating disasters and writing about them!

If you're interested in the games industry and how it works - even if you aren't actually aiming for a career as a video game designer - you could do worse than download and read this guide. I think it's very nicely written but it also gives a fascinating overview of an industry which is changing and developing so rapidly that our kids generally know more about it than we do.
Abertay Amazon Computer games Dundee game design Guerilla tea Kindle Rockstar Video Games

Marit said…
It's great when you see your child find 'his thing' and be happy! My son started at the University studying Artificial Intelligence (he's in his second year now) and he seems to 'blossom' - he had a hard time finding the right study and - just like your son - he knew what he wanted to study but didn't know how it was called... Hooray for young fellows! I hope you're doing well too Catherina, haven't visited your blog in a while (I've been busy with a lot including setting up a magazine!)
November 27, 2011 8:06 am

Catherine Czerkawska said…
Hello, Marit! I know what you mean about seeing them 'blossom' - and how lovely that your son has found what's right for him. We're just back from Charles' graduation in Dundee and what a joyful few days it was. Tell me more about the magazine!
November 27, 2011 10:13 am

D.S. said…
Good luck to your son on his book! It sounds like he's found his path and is now sharing his experience with others. That's inspirational!

Catherine Czerkawska said…
The art is great isn't it? My son did my 'coffee' logo on the other post - and made this cover too, but most of the actual art - which is outstanding, I think - was done by a young Scottish digital artist called Matt Zanetti. He, my son and two others have set up their own video game development studio called Guerilla Tea.
December 05, 2011 10:46 pm