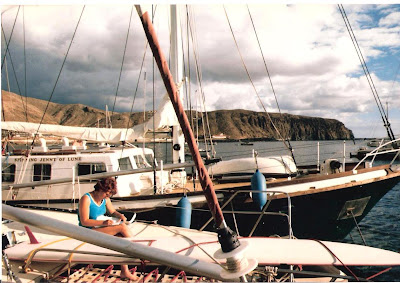 Simba lay rocking gently at anchor in Los Cristianos Bay. It was January. The sun was shining, the air was soft and warm and I was unpacking my bag and stowing away my kit in the tiny amount of cupboard space allocated to me.

Simba was by any standards a roomy boat, with a huge saloon and three cabins. Naturally, the two biggest and best cabins, each with a double bunk that was more like a double bed and its own large en suite shower, were reserved for the customers. Sometimes they were paying customers who chartered the boat from the company which owned it. Sometimes they were guests of the director, back in Scotland. A lot of the time we had the catamaran completely to ourselves. The skipper's cabin was smaller, but not uncomfortably so. And there was a toilet and shower next door, for our own use.

It was surprisingly easy to slip into the rhythm of living aboard, even for a fair weather sailor like me. Especially for a fair weather sailor like me. But I have to confess, I was still happiest sitting at anchor in Los Cristianos bay and watching the constant small procession of activities of this busy but essentially laid back port passing me by - as well as reading and writing. I did a lot of writing.

When we had visitors, we had to sail, which made my husband very happy.

It made me very sick.

I made several interesting discoveries on those voyages. One was that seasickness medication doesn't agree with me. The second discovery was that seasickness does eventually go away. It took me two weeks. (I counted every miserable day!) After two weeks spent aboard, sailing between islands, being literally prostrate with sickness, unable to even sit up without feeling dizzy and disorientated, it quite suddenly ceased. After that almost nothing would have made me sick. As anyone who has sailed will know, if you've been on a boat for a few hours, when you get off the boat, you can still feel the land moving - a very curious sensation. After the seasickness disappeared, this effect disappeared too. I was comfortable at sea and on land. But it took two weeks and the effect only lasts while you're living on board. If I were to do it all again, I'd have to go through the same uncomfortable process.

Simba was one of the biggest, flashiest and most beautiful yachts in the harbour so it wasn't surprising that she attracted a lot of attention. My husband was young and fit and - having spent most of the winter so far working aboard in the sunshine - looking particularly bronzed and attractive. I took a sort of perverse pleasure in stationing myself on the seaward side of the deck. Girls would hire pedalos in Los Cristianos and - assuming that Alan was alone on board - pedal out in the hopes of chatting up this 'rich' man with the fancy boat. They would circumnavigate Simba only to find me waving at them from the other side, whereupon they would lose interest and target another yacht and yachtsman.

We went ashore for provisions most days, in the big dinghy, leaving it tied up against the low wall of the slip. Sometimes we used an engine and sometimes we rowed, heading for the supermercado and then ferrying everything back to Simba.

When you're living on board a boat, everything takes time. When you're living on board a boat in the sun, you don't really mind. There are some things to remember though. Most of all, you have to remember not to block the sea toilets, being very careful at all times what you put down them. (Unblocking them is a hideous job for obvious reasons.) And you have to be careful never to waste water, since - even aboard a boat with big tanks - refilling them can be problematic. You become, by default, environmentally friendly.

There can be few things more irritating and alarming, incidentally, than hearing your latest charterers taking a ten or fifteen minute shower, even when they have been tactfully reminded that water is a finite resource. It doesn't happen with experienced sailors - but it sure happens with the other kind.  I got used to taking a pretty good shower using a bucket of clean water. A bucket and a half meant that I could wash my hair and do a bit of washing at the same time. Fortunately, the washing dried within a couple of hours when festooned about the boat like a curious collection of flags. 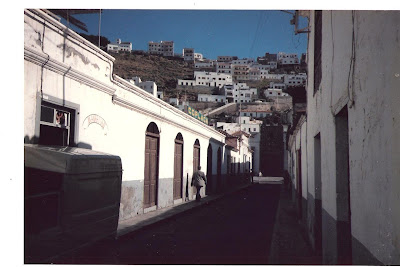 Water is at a premium in the Canaries, especially in this hot southern part of Tenerife. And it isn't very drinkable so you have to treat it or boil it. Or treat it and boil it. On the other hand, the water on the island of La Gomera is very good: fresh and sweet and clean. So we used to sail to La Gomera quite often. It proved to be one of the most magical places on earth. I knew I was going to have to write about it. And - eventually - that's what I did.