Linens and Lace and Other Inspirations

August 29, 2015
For some years now, I’ve been running another business on the side, supplementing my writing income by buying and selling antique and vintage textiles of all kinds. Textiles have been pretty much a lifelong passion with me. It all started when I was a child and used to go with my mum to the saleroom – she would always be looking at pottery and porcelain while I would be gazing at linens, lace, embroideries and the occasional old shawl that was always thrown in the corner of the saleroom, because nobody bothered much about old clothes back then. Or, come to think of it, old teddies. How time have changed!

For me, there seemed to be something quite magical about them. When I went to university in Edinburgh, I was fascinated by the emerging vintage clothes shops there, even though ‘vintage’ had not yet become a mainstream interest. My mum was a very good seamstress and she made me a long Dr Zhivago coat (well – Lara coat, really) in black wool with fur around the hem and neck. There was a maxi dress too, from one of those Vogue Paris Original patterns, a beautiful thing with a weighted hem. I still have that, along with a long white lacy skirt, originally a petticoat, very ornate and detailed, bought from a little shop down in Stockbridge with carefully saved cash. Old army greatcoats were in fashion for the boys, long skirts, Indian cotton dresses for the girls. I remember going to one party in a nightdress from Marks and Spencer, a long candy-striped garment with a high waist, straight out of Jane Austen.

'Do you know,’ said the shocked wife of one of our lecturers, ‘that some students wear nightdresses to parties?’ I’m still not 100% certain whether she guessed what I was wearing or not ...


Nowadays, with a lot of writing to do, I spend less time on the textiles, but I still browse boot sales and the local saleroom, still splash out on a box of old linen and lace and sell most of it on to other textile nuts. But all this has certainly helped to enlighten me about costume in my historical fiction. Finding out what somebody would have worn, the how and the why of it is a vital part of the research for me. And also you’ll spot the howlers, like the mediaeval underpants mentioned in a recent post about anachronisms in historical fiction by Mari Biella.

A few years ago, a curator of textiles gave a small group of Society of Authors in Scotland members a private viewing of a few of the textiles in storage in one of the big Scottish museums and since they were for study purposes, we were even allowed to handle some of them. It was enlightening, not least because certain items were beautiful to look at but very badly stitched ‘behind the scenes’ as it were. Clearly some dresses were like theatrical costumes - the illusion was everything. She also told us that although the really poor would obviously have great trouble keeping clean, for many ordinary eighteenth and nineteenth century people - tradespeople or tenant farmers, for instance - keeping their linens clean would have been important.

Essentially, they would not be as smelly as we think.

Looking at inventories of possessions, you can see that people of even limited means would have several shirts, shifts, etc so that the items worn closest to their bodies would be reasonably clean. Which makes sense when you think about how uncomfortable it would be to play host to fleas and lice, the inevitable result of filth. And for country people, a great deal of linen was spun and woven at home. Elsewhere it could be bought by the yard. Pretty printed cottons were also becoming fashionable through the eighteenth century and ease of laundering was an important factor in their popularity.

If you think about how seldom even today we dry clean a winter coat, for instance – perhaps only once a year, unless we’ve been out in the mud – you can see how little we've changed in this respect although I don't think a daily bath was an option or even thought desirable. But then nor was it the norm back in the fifties, and I don't remember that the world felt particularly grubby, even then.

This interest in clothes has been very important to me in several of my novels. In The Curiosity Cabinet, not only is an embroidery central to the plot, but the clothes of a dead woman, gifted to another woman in desperate straits, provide a turning point in the story. In my nineteenth century Polish historical epic, The Amber Heart  what the heroine wears became a sort of indicator of her character, all the way through - and certainly it mattered to me in terms of how I perceived her relationship with the hero (or possibly anti-hero) of the novel. And in The Physic Garden, an authentic embroidered garment looms very large in the story.

Perhaps most of all, though, it has been important to my work in progress, the Jewel, about Robert Burns’s wife Jean Armour. The daughter of a master stonemason, she was not hugely wealthy but still cared very much about her appearance as a young woman of some consequence in the small town of Mauchline. This perception of her ran contrary to many subsequent accounts of her as a plain countrywoman, not quite 'worthy' of her famous husband. I never really believed that. The six ‘Mauchline Belles’ of which Jean was one - I always see them as eighteenth century cheerleaders - are described by Rab as being keen on fashion too. ‘Their carriage and dress, a stranger would guess, In London or Paris, they'd gotten it a'.’ So even in Mauchline in 18th century Ayrshire, the lassies were happy to imitate London or Paris fashions if they could.

Later on, it becomes obvious that Rab liked his wife to dress as well as possible on their limited budget. He spent money on the finest ‘lutestring silk’ for her gowns, and the latest fashion in printed shawls. His own stylish mode of dressing was one of the things that her family so disapproved of during their courtship– and also one of the things that made Jean fall for him. She continued to appreciate nice things and pretty clothes throughout her long life.

Finally, the single sexiest garment the textile curator showed us on that museum visit, was a linen shirt. I’ve found these kind of things in boxes of old linen, but never something just as wonderful, as old, as well preserved, as that late eighteenth or early nineteenth century linen shirt, a man’s garment, with flowing sleeves, lots of fabric and a smooth, cool texture under the hand: a bit like the ones you see Ross Poldark or the musketeers wearing on the recent television dramas.

But the really interesting thing is that such shirts were deemed to be very intimate. They were undergarments. So if a young lady actually saw a man in his shirt, like Mr Darcy on that TV adaptation, it would have been very shocking indeed, even for somebody as forthright and brave as Lizzie Bennet! 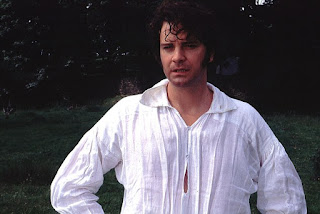 I'm hoping that the new novel will be published in 2016. Meanwhile, if you're another textile nut (or even if you're not) you could check out The Curiosity Cabinet in particular. I only wish I possessed an embroidered cabinet like the box of the title - but unfortunately, I don't.
antique textiles costume Historical Fiction historical novels Jean Armour The Amber Heart The Curiosity Cabinet vintage clothes