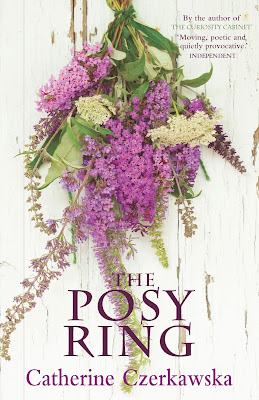 Today is Imbolc, St Bride or St Bridget's Day and an important day in the Celtic world, marking the beginning of spring. I was reminded of it this evening, sitting at my desk, brooding on Brexit, when I realised that not only had the day lengthened considerably, but the birds in the garden were singing and sounding distinctly spring-like. It was very cheering.

Coincidentally, I'd been rereading my own novel, the Posy Ring, and deciding that I was still very fond of these characters and really would like to revisit them and find out what happens to them next. I've been asked to chat to a local book group about this novel, among other work, so I thought I'd better refresh my memory.

I suddenly remembered that I had written about the young women of the Scottish island where the novel is set, celebrating the festival of Bride in 1588.

'In February there was a brief respite when the young women of Achadh nam Blàth and the nearby clachan celebrated St Bride’s day. They took a sheaf of oats from the previous year’s precious harvest, formed it into a rudimentary figure, dressed it in some scraps of wool and linen, and trimmed it with whatever decorative items they could find: a handful of glass beads from broken jewellery, small shells from the seashore, a garland of daisies, snowdrops, coltsfoot as well as hazel catkins, culled from sheltered parts of the island. The figure was supplied with a slender white wand formed from a piece of birchwood with the bark scraped off. Ishbel had made a bed of rushes covered by a baby blanket close to the house door. There, Bride was welcomed in and laid down comfortably for the night with a couple of candles burning to keep her company.
‘She was the foster mother of Christ,’ explained Lilias. ‘And so we honour her in this way. But she brings the springtime with her as well. Soon, soon it will come.'

A little later on, Lilias tells the stranger about the cailleach who brings winter - no bad thing, unless she lingers too long. To everything there is a season.

‘I am always forgetting how very little you know. The cailleach is the wise old woman. She walks the fields, bringing winter in her wake. A good thing too. The land needs to sleep and we need to rest for a time, while she walks and renews, walks and renews. Only now, she’s growing weary. It’s her turn to lie down and sleep. Then the springtime will come. You can feel her clinging on. Soon, she’ll not be able to resist. She will lie down and take her rest, and the blessed Bride will come and bring the springtime with her all over again.'

If the snowdrops massed on the roadsides as I drive in and out of this village are anything to go by, Bride seems to be well on her way.