Don't Come To The Highlands - Read This Instead!

My spooky little novella, Rewilding, is currently free on Amazon Kindle, and will be till the end of the week, so download it now, even if you don't want to read it till later.

I wrote this late last year, after a trip to visit friends who live on the beautiful Isle of Skye. We've been talking on the phone now, lamenting the fact that we won't see each other for a little while.

The cover picture is of the amazing Dun Beag Broch on that island, although that isn't where this particular story is set - but it was certainly one of the things that inspired it. The other was this extraordinary song by Julie Fowlis - not just beautiful, but very unusual because it is sung from the point of view of the 'water horse', (not the kelpie who is a little more benign) pining for the woman who has deserted him, when this creature is usually portrayed as one of the most dangerous of supernatural creatures.

This long short story that I called Rewilding, hardly long enough to be called a novella, but certainly too long for a short story - seemed to arrive all of a piece, the way things sometimes do. I could see it so vividly in my mind's eye that it was almost like taking dictation. It's a theme I may well go back to later - something that intrigues me. After all, I have a Masters degree in Folklore, and every now and then my fascination with these things rears its head all over again.

Some years ago, when we were driving back from the Isle of Gigha, on one of those sunny, cloudy, gorgeous days that you so often get in this part of the world, we were heading down the side of Loch Fyne. As anyone who has driven along this stretch of road knows, there's a range of high hills on the opposite side of the loch, treeless and smooth. As we rounded one of the many bends, we were more or less facing these hills, where intermittent cloud shadows and sunshine chased each other.
And then ...
'Are you seeing what I'm seeing?' I asked my husband, who was driving.
''Yes,' he said. 'And I can't stop anywhere.'
He couldn't of course, and he had to keep his eyes on the road. So there are no pictures.
But briefly, straight ahead of us, the cloud shadows had formed a clear image, like a sharp projection on the hillside, of two huge horses, rearing up, black horses, manes flying in an unseen wind.
It was uncanny. I have never seen anything like it before or since. And it faded as quickly as it had come.

I think that experience too fed into the writing of this story. In my head, there's a sequel. Maybe I'll write it.

Meanwhile - please, please, please don't go to rural areas, thinking to 'escape the virus'. All you do is endanger those of us who live here. But you could escape into a story instead! 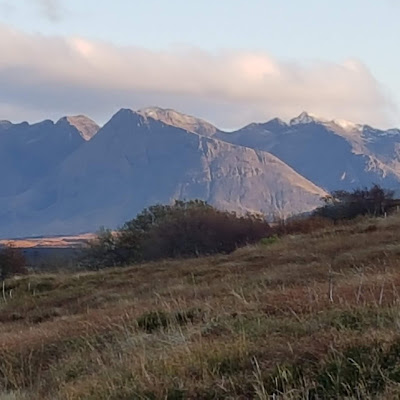 spabbygirl said…
the book reads in one seamless flow, as if it was meant to be and you just pulled it out of the air. Its haunting & lyrical, just like a Julie Fowlis song. A great read, I recommend it.
March 27, 2020 2:52 pm