No More Crime (For Now) Thank-You. 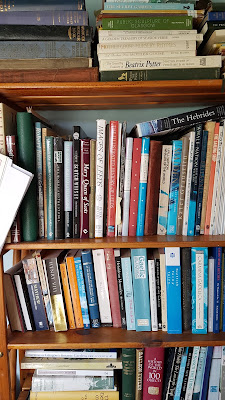 I apologise in advance to all my writer friends who work in this genre, but I've had it with crime fiction. This is probably a temporary state of affairs, but I know what brought it on. A little while ago, a friend who often has similar tastes in books, recommended Fred Vargas's 'Commissaire Adamsberg' novels. I read one from the middle of the series, The Ghost Riders of Ordebec. I was captivated from the first few pages, and then I went back and read the whole series, obsessively, far into the night.

Feeling absolutely bereft when I had finished - and I may even go back and read one or two of them again - I read Vargas's three 'Evangelists' novels. I wasn't quite so captivated by them, but I still liked them very much indeed, especially the last one: The Accordionist.

Then, as you do, I went on Facebook and asked for recommendations for similarly captivating novels. They flooded in.

And you know what? I haven't really liked any of them.

One, I bought on Kindle, read several chapters, and then sent it back for a refund. It was much too violent for me. It began with a woman being tortured in graphic detail, and went on with the murderer fantasising about torturing and murdering the torturer.

I tried again. I bought a couple more, read about fifty pages, and nearly died of boredom. I downloaded samples of various recommendations. Just couldn't get into them.

Fred Vargas, incidentally, is female, and the string of books I've started and discarded this week are all by men. Does that tell me something? Maybe. But I love Dickens, Thackeray, Trollope, E F Benson, China Mieville, James Joyce, Phil Rickman (especially his standalone paranormal books) and many many more. I'm nothing if not eclectic in my reading. And many of my favourite writers are men.

I need to move on. But partly, as the same friend who recommended Vargas pointed out today, it's that Adamsberg was a kind of watershed. The books were so original, the characters so vivid, the settings,  even the police station concerned, so wonderfully quirky and yet real, in the way that real life is so often bizarre and funny and strange, the plots so clever, and Adamsberg himself so engaging that everything else pales by comparison. There's a pedestrian, box ticking quality about so much of what I've been trying and failing to read.

I wonder if it's the publishing industry itself? Maybe they're right, because all of these books had many glowing reviews. It wouldn't do if we all liked the same thing, would it? And people must be buying them, reading them, loving them. So who am I to complain?

But for the moment, I really have to give myself a break and find some other fiction to immerse myself in. I need somebody like Barbara Pym. Or Shirley Jackson. Or Rumer Godden (a recent discovery for me) or even - back to crime again - a Margery Allingham.

Oh go on then.
Any recommendations?