Another Outing for my Radio Dramatisation of Ben Hur 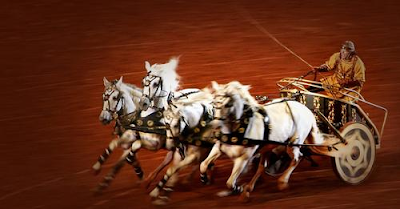 Back in the dear dead days when I was writing lots of radio drama, I dramatised Ben Hur in four episodes, for BBC R4. Now, you can hear it again on R4 Extra, and you can also catch up with it online, here.

I've been listening to it again myself, because my only copies of it seem to be on cassette (although I still have the scripts filed away somewhere, I think.) To my surprise, it has stood the test of time. Not everything does, but I've occasionally listened again to my dramatisations of Kidnapped, Catriona and Treasure Island, and found that I've enjoyed them. A lot of it is down to the original material, the skills of the producer/director (with Kidnapped and Catriona it was my friend, the late Marilyn Imrie) the music, the editing and perhaps most of all to a brilliant cast. Radio, like all drama, is collaborative.

Ben Hur was directed by the late, much missed and exceptionally fine radio producer Glyn Dearman, with a cast to die for, including Jamie Glover as Ben Hur, Samuel West as a suitably villainous Messala, and Michael Gambon, no less, reading the relevant bible passages. The sound - the amazing sound and music - was by Wilfredo Acosta.

The original novel, should you want to give it a try, is still available. I found it quite hard going. And when I was dramatising it, I found one or two significant plot holes that I had to fill in,  in the course of the drama. But it is undoubtedly a very good story indeed - as anyone who has watched the film will already know.

The most fun bit to write and record was definitely the chariot race. If you want to hear how it was done, though, you'll have listen yourself!