Monkeying About The Secret Forest 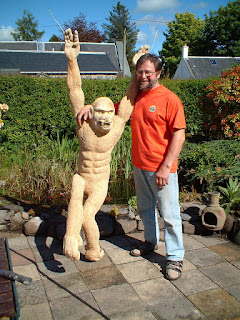 I was emailing a colleague yesterday, when I realised that my husband and his friend were carrying large, carved, scary, wooden monkey through house. Is it me, or are such bizarre events increasingly commonplace in this household? Life grows ever more surreal.
Monkey, nicknamed Harrison, for reasons best known to Alan (possibly string of connections starting with Chewbacca, via Han Solo) is destined for the Secret Forest in Kelburn Country Centre, near Fairlie in Ayrshire.
Alan has a large number of his carvings there (and some of his paintings in the cafe as well). Every year, he has to replace a few of them, since they are pinched, by appreciative members of the public. Wish they would decide to buy them, rather than nicking them, but at least they like them. Says he is considering carving 'Stolen from Kelburn Country Park' into the back of them.
Harrison is intended to be scary, and has teeth like no monkey in life. He was transported to Troon Cruising Club, where he embarked on small yacht to be ferried to Largs Marina, by water. Husband and friend tell me they lashed him to the mast for the final leg of the journey. They also say that as they motored into the marina, there were many spectators, but nobody laughed. Find this hard to believe, but sailors sometimes take things (and themselves) very seriously. Harrison will be seen, shortly, by visitors to Kelburn.
Late yesterday afternoon, I joined the boat. Harrison had already departed for his new home. Boat is joint project of husband and friend. Old and rather nice Scandinavian built yacht, called Swedish Maid, which name always elicits giggles. Wonder why?
Always forget how much I dislike sleeping on small boats. Or not sleeping. Must down to the seas again, or perhaps not. Bang head all the time. Husband and friend are like two small boys, camping in the garden. They adore it all. Only remedy is to drink a lot of wine Once spent three months aboard a boat in the Canaries - but it was a 50 foot catamaran, that Alan was skippering for a charter company. It was wonderful. Sat and watched the harbour for days on end. Wrote an extremely romantic book called The Golden Apple. Came back pregnant. Nothing has ever really lived up to it since.