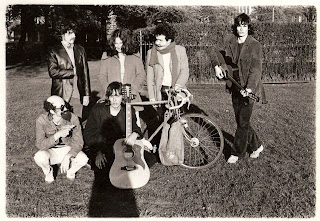 The semi-hippy chick in the middle is me, back in the early seventies, in Edinburgh. There's a maxi skirt in there somewhere as well, although the bike is in the way. The guy on the right with the guitar is distinguished poet and novelist Andy Greig. Standing between Andy and me, with his hand on the bike, is poet and playwright Brian McCabe. (He's wearing a false face in case you're wondering.) On the left of the picture is somebody called John Schofield, who organised poetry festivals in Edinburgh way back then. The last I heard of him, he was involved with archaeology in the City of London. In front are two musicians from Fife, George (with another false face, beard etc) and John, of the cheekbones with the fag hanging out of his mouth. Cool. They were part of a band. My own writing on the back of the pic tells me that there was a Pete and a Dave and another Dave involved too, but I can't for the life of me remember who they were. I do know that John of the cheekbones (I think he was the one, but I could be wrong) wrote some brilliant music to one of my poems, called Cut Glass, which has come back to haunt me from time to time. More prescient than I ever imagined. I'll post it immediately after this.
Looking at it now, the thing that really strikes me about this picture is how modern we all look. You would expect a thirty five year old photograph to look dated. I suspect that this could have been taken on the Meadows (which was where we were back then) yesterday. John from Fife has a Paolo Nuttini look about him. Only John Schofield's too smooth leather jacket gives the game away.
If anyone out there knows what became of the band from Fife, I'd love to hear from you.
Browsing through Primark the other day was a deja vu experience. All those brightly coloured prints and smock tops. Dug out vintage Marimekko dress I brought back with me from Finland in the mid seventies. Felt strangely elated - and saddened - by rush of memories . Or as I wrote at the time: 'Take care. Oh speak to me of things that do not matter.'