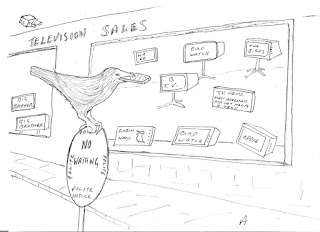 I have a television license, honest, but I have friends who don't have a television, and are constantly receiving horrible letters from an authority that doesn't believe that anyone could get along without one. In fact over the past few years, here in the UK, all kinds of government sponsored advertising (mostly on TV!) has undergone a profoundly irritating change. They used to be content with patronising us. Now they assume an increasingly threatening tone. Big Brother - about twenty four years too late - is well and truly in charge.

We have reason to believe
says the letter
that yours is the only house in the street
without a television license.

That would be about right thinks the crow.

We have passed your details
to our Enforcement Officers
who will shortly be in your area
says the letter.

Bring them on, says the crow.

We will not tolerate abuse of our officials
adds the letter, loud with intimidating
phrases like
POLICE AND CRIMINAL EVIDENCE and
CAUTIONED and PROSECUTION.

The crow, well aware of the law,
knows that they would have to catch him
watching the television he doesn’t possess,
to find him with his non existent
remote control in his claw.

Cor says the crow and shreds their message.