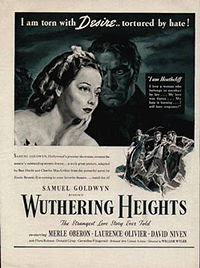 Got up very early to watch the 1939 version of Wuthering Heights on TCM, with Laurence Olivier and Merle Oberon. I have a long and loving relationship, not just with the novel, which I adore, but with this particular movie - although I'd be the first to admit that the film and the novel are very different. On the other hand, there has been such a procession of horrible dramatisations of this book, that the Olivier version always seems like the benchmark against which all others fail miserably. At least this version looks good and - praise the Lord - actually uses some of the dialogue from the novel. Most of the versions I've seen (and I've seen a lot) seem to involve the relentless imposition of somebody else's vision on a book that people clearly obsess about! Me too, me too...
The reason I'm so fond of the Olivier film is that it was my dear late mum's favourite movie. I grew up knowing about it, and was actually named for Catherine. I was trundled over the Howarth moors in my pushchair as far as Top Withins, the ruin that was supposed to be the site, if not the model, for Wuthering Heights itself. But, beyond all that, my mum's Yorkshire family were great readers, so I was also introduced to the novel itself at quite a young age.
Olivier looks right as Heathcliff, and, although the film relentlessly excludes the satisfying second half of the novel, in which the younger generation in some sense manage to resolve the intractable problems of the older set of characters, it still does less violence to the original than any of the others. On the other hand, Oberon is just petulant and irritating. It's actually very hard to find a Cathy who isn't irritating, and yet I only ever find the character in the novel fascinating, a brilliant portrait of selfish self destruction which seems absolutely true. Let's face it, this is a novel which is hugely resistant to dramatisation, and yet people seem to want to carry on trying.
The problem everyone encounters is the sheer, relentlessly violent sadism of Heathcliff. However you look at it, the novel is an exploration of cruelty as well as love, of nature red in tooth and claw. Olivier's portrayal spawned many thousands of romantic novels, with an equal number of tall, dark, handsomely brooding heroes. Olivier can brood romantically for England. But as far as I am aware, nobody - not even Olivier - has ever managed to capture the demonic nature of Heathcliff on screen. I don't think it's possible.
My latest novel, The Summer Visitor is, in a way, a homage to Wuthering Heights. The original is lodged so firmly in that part of my brain from which my creative inspiration comes that from time to time, I find myself returning to it. So The Summer Visitor is a story of a damaged soul, and an obsessive love in a rural setting. But I had to tread very carefully. Inspiration is fine. But imitations tend to be pale and invariably fall short of the incomparable original.

margaret blake said…
Catherine, Is your novel published yet? If so please let me have the details would love to read it.

Catherine Czerkawska said…
Not published ... yet. But it's with my agent at the moment, Margaret. Fingers and toes crossed!
January 11, 2010 1:25 pm

Karen Jones Gowen said…
Delightful post! Wuthering Heights is one of my favorites, too, and I enjoyed your take on both the film and the character of Heathcliff. Now I want to go back and read it again! And yes, your book sounds fascinating, would love to read it.
January 18, 2010 7:04 pm