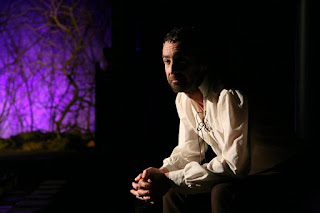 I had an email from a friend last night.
He had been to see the play, and loved it.
So, he asked, what happens now? Do TV/film offers pour in? Or is that it?
Well, sadly, that tends to be it. Which goes some way towards explaining the reasons why writers become a little miserable at the end of such a project. One minute, or so it seems, there you are, being taken seriously, congratulated and hugged on all sides (actors and others in the theatre are nothing if not touchy/feely) and the next you're back in the garret, all on your own, with only the PC for company, wondering what to write next. The change is instant and faintly depressing.
It isn't so bad for actors, especially if they have another project in the offing. If they're lucky, they have a little break and then they are onto the Next Big Thing. But for the writer, the sense of let-down can be intense and disturbing. You add the play to your CV. You print out any good reviews and add them, along with production pictures to your portfolio, and then ... well, you move on.
With books and stories, you at least have something to show for it all, something that still exists, something that you can look at occasionally and say 'I did that!' But even if a play is published in an anthology, there is a sense in which it still only exists as a real entity when it is in production. The words on the page are all well and good, but they need actors, director, designer and audience to animate them, to recreate them, to - essentially - turn them into a play.
It is - moreover - a dimension which is seldom properly communicated to students who study drama as a form of literature. If literature students never actually see a play in performance, then it is a little like music students spending a whole year studying Beethoven's Ninth without ever listening to the music. Something, arguably the most important thing of all, is missing!

Karen Jones Gowen said…
That's very interesting, I never had thought of it! You've got to really love the theater to be a write for it, clearly.
February 09, 2010 6:57 am

Catherine Czerkawska said…
Well, more, more, more would be very nice! KarenG you're right, you have to love it to write for it - my advice to any writer would be to have a go. But I do think you have to treat it differently from other forms of writing - it's very much a collaboration, and when it works it's wonderful. But you have to go into it with your eyes wide open!
February 09, 2010 1:18 pm

Bill Kirton said…
A very familiar condition, Catherine. Sad, yes, but I also think the feeling is a confirmation of one of the excellences of theatre - i.e. that it's vital, enervating, but ephemeral - in other words, it's life. There's none of the artificial permanence of novels - yes, they're still there on the shelf or in the library but is anyone reading them? Who knows? Whereas you were there through the process, you lived it all, saw Liam bring your character to life time and time again through the week. And I'm bloody sure that an awful lot of those who saw it are still carrying it with them as I am - as a REAL experience.

I've read about Robert Kirk since I saw the play and the bare historical bones of who he was and what he believed are fascinating but, for someone who hasn't seen TSC, may probably be just another quaint example of ancient superstitions. Your man, however, sensed all the other layers that still fold around us - not just the fairies and elves of folklore, but the mysteries of the natural world, the calls and rhythms of hills and glens, the whispering of waters - and all the Jungian (I suppose because I'm not a psychiatrist) undercurrents of our psyches.

I understand what you're feeling now but I want to remind you that you've created something that hasn't died with the last performance.

Oh, and I should also relate a snatch of conversation between two members of the audience in the male ablutions afterwards. The first said that it was so good that it would make 'a good story to read'. They then said they enjoyed the production and the other remarked that Liam 'wasnae built like you and me' - and I don't think they were referring to his philosophy.
February 09, 2010 5:51 pm

Catherine Czerkawska said…
Thanks for such lovely comments, Bill. And you're right. We don't, as a rule, think about how such things live on in the minds of those who have seen them - but we should. They were right though! Liam isn't 'built' like the rest of us. There's something of the genius about him. I always feel it's a privilege to know him and if that sounds sentimental, I can't help it!
February 09, 2010 6:00 pm