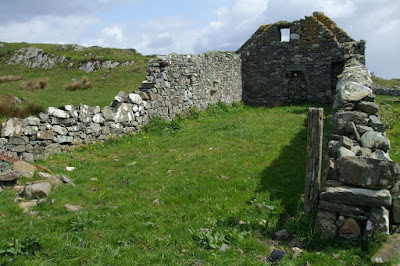 I blogged about this when it was first shown, but last night - weary to the point of catatonia, and with absolutely nothing else to watch while I drank a late night cup of tea - I switched to the repeat of the first episode of ITV's recent dramatisation of Wuthering Heights, half hoping that it might have improved in the intervening months. It hadn't. The best thing about it was still  the scenery, which was gorgeous. Everything else was wrong.
I have a great many friends who adore WH (and about as many who loathe it!) and I think all of us who love it tend to share the same reservations about the many and varied dramatisations to which we have been subject over the years. These are major reservations which are almost never inspired by - for example - the dramatisations of Austen novels which have come to our screens over the past few years. We may have a few quibbles about these, but on the whole, they are forgivable and in some cases - the film version of Sense and Sensibility springs to mind- we get so caught up in the brilliance of the production that it's hard to find any fault at all! This never seems to happen with Wuthering Heights. Instead we watch, with the triumph of hope over expectation, only to have our fears realised yet again. They can't ever seem to get it right.
I know it's a difficult novel, but I still find myself wondering why, since when I talk about it to the friends who DO love it, we all seem to love it for the same reasons: the intensity, the passion, the cruelty, the primitive, mythic quality, the uncompromising nature of so much of it, the way in which we don't need to like these characters to be caught up in their story.
So what was wrong with the latest version? Well, just about everything except the landscape jarred with me.  Wuthering Heights itself was all wrong, for a start: much too big, too clean, too grand. It looked more like Thrushcross Grange. The Heights of the book is described as a Yorkshire farmhouse in the old style, sprawling rather than monumental, with its yard, and its sheepfolds and stables: low ceilinged, dark - except for the roaring fire at the very heart of the house, whose flames run through the book, warming the place and the people, central to the story. I've never pictured it as the large, light building of this adaptation. Cathy was all wrong too, but then they never do seem to get Cathy right. She's always too wishy washy and while I'm at it, the real Cathy would have scorned to call Heathcliff 'my love' all the time, the way this one seemed determined to do, whining about his desire for revenge. She's never ever strong enough. Frankly, she should be lovely to look at but mad as a fish, difficult, dangerous and not very nice to know.
Heathcliff looked all wrong too, but maybe that's a personal judgement. Worse, his lines were all wrong. The central conceit of WH is that Heathcliff is utterly obsessed with Cathy, and no matter how badly she treats him, he would die rather than take his revenge on her. But that won't stop him taking his revenge elsewhere. (In many ways, this has the strange, claustrophobic atmosphere of a Jacobean revenge drama). If she asks him not to do something, whether it's refaining from killing lapwings, or refraining from killing her husband, he'll obey her but only because it's her. When she's gone, when she is no longer there to temper him, he becomes utterly demonic. But this doesn't make any sense at all, if you haven't shown the extraordinary nature of that relationship first.
Better to quote from the book itself, don't you think?

'You teach me now how cruel you've been—cruel and false. Why did you despise me? Why did you betray your own heart, Cathy? I have not one word of comfort. You deserve this. You have killed yourself. Yes, you may kiss me, and cry; and wring out my kisses and tears: they'll blight you—they'll damn you. You loved me—then what right had you to leave me? What right—answer me—for the poor fancy you felt for Linton? Because misery and degradation, and death, and nothing that God or Satan could inflict would have parted us, you, of your own will, did it. I have not broken your heart—you have broken it; and in breaking it, you have broken mine. So much the worse for me that I am strong. Do I want to live? What kind of living will it be when you—oh, God! would you like to live with your soul in the grave?'

'Let me alone. Let me alone,' sobbed Catherine. 'If I’ve done wrong, I'm dying for it. It is enough! You left me too: but I won't upbraid you! I forgive you. Forgive me!'
'It is hard to forgive, and to look at those eyes, and feel those wasted hands,' he answered. 'Kiss me again; and don’t let me see your eyes! I forgive what you have done to me. I love my murderer—but yours! How can I?'

I strongly submit that if you can't live with that central premise, can't accept the novel on its own terms, rather despise it in fact, then you had much better dramatise something else: Jane Eyre or Villette for instance. Instead, they always seem determined to transform Emily into Charlotte, even if it means rewriting the whole story in the process. It won't do. Definitely could do better.

callyphillips said…
Totally agree with you!!!! It's interesting to note that transmuting Wuthering Heights to Jane Eyre is exactly what Charlotte Bronte did when Emily got publisher before she did but when all decided that WH was too extreme for readers so Charlotte basically reworked it taking the criticism on board to create Jane Eyre. But yes, if you want Jane Eyre do Jane Eyre.... I wish if people wouldn't do it justice they'd just leave WH alone... and expect I'm with Emily Bronte on that one.
August 11, 2010 3:40 pm

Marit said…
It's been years (over 25 now that I come to think of it!) that I read the novel. In Dutch, that is. I haven't seen the tv-serie (don't watch BBC often, is it on BBC by the way?) but I guess it will be in Holland pretty soon (they always seem to buy "your" series - and I rather have those then the American ones!) Your post makes me think I definitely should re-read WH - and I will think of you whenever it's on tv (but from what you write, I'm sure I will degree with you!)
August 13, 2010 7:11 pm

Catherine Czerkawska said…
It's an ITV serial, Marit, but they do some good work. I just didn't like this one! Oddly enough, I saw the same actor (Tom Hardy) in a film called Inception, last night, and he was rather good. But he wasn't a good Heathcliff!
August 13, 2010 7:23 pm

Catherine Czerkawska said…
Think you are probably right, Margaret. But they are all so abysmal that it becomes frustrating!
October 08, 2010 8:39 am