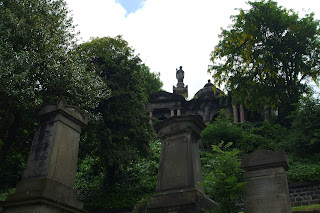 After a little gap, during which I've sorted out a bit of paperwork, made a lot of lists, organised a few meetings, and generally faffed about, in a miserable sort of way, I've more or less got my head around the fact that I'm just going to have to wait and see what happens to The Amber Heart when my agent sends it out. But before I really get going on the sequel, the Winged Hussar, with all the research and writing and rewriting involved, there's another project I'm keen to do some work on and I want to do it now. I'm aware that the Winged Hussar, which is essentially my Polish grandfather's dramatic, deeply romantic and ultimately tragic story, will become so all absorbing for me over the next year that I won't want to write anything else or at least nothing very long or demanding. So I want to finish this first: another historical novel but this time with a Scottish setting.

I'm about to start changing a manuscript, one I 'made earlier', from the first person narrative in which it was written and extensively revised, into a third person narrative and this is no small task. First there are all the faintly boring technical changes, going through the whole thing and translating the perspective from a very personal single narration into a third person story. But that's quite a superficial series of changes. It's only then that the really interesting work can begin, because the purpose of the change is partly to allow me to tell the story in a more flexible way, and partly to allow me to get inside the heads of a couple of other major characters. Hardly anyone has seen this new novel yet. It's set mostly in very early nineteenth century Glasgow - but any criticisms I was given of it from the few people who have read it, were all to do with the 'voice' in which it was written. Although it was a voice I had grown very fond of, to the point that I sometimes seemed to be channelling this man - and maybe I was, since he's based on a real character - I could see how the story might be better told from a different perspective. Or from multiple perspectives.

All the same, I do think this earlier first person draft was a stage which I - and the book - had to go through. It's quite a powerful story, but one that the first person form of narration doesn't allow to emerge in any fully rounded way. I can see that now, but it's taken a longish period of the manuscript lying 'fallow' on my PC for me to realise it. Changing narrative stance is something I occasionally suggest (blithely) to students if I feel they need another perspective on what they are writing. It's invariably an interesting exercise, but in this case I get the feeling it's a necessity rather than an experiment!

margaret blake said…
I know from changing two chapters from first to third person, how hard the job is. Well done for doing this with a whole book.