Researching Historical Fiction - a Sideways Look and a Spooky Experience! 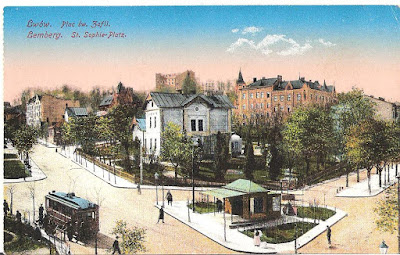 I've been browsing eBay recently, in search of bits and pieces of research material for the sequel to The Amber Heart. The Winged Hussar will take the story of the family - and the house of Lisko -  into the twentieth century, and through WW2. ﻿ Unlike The Amber Heart, which was loosely inspired by several episodes from my remote family history, the central story of The Winged Hussar is based more closely on my grandfather's incredibly romantic and dramatic story. For me, as a writer, there's a difference. Because the events of The Amber Heart were reasonably remote in time, as well as in place, so long as I did my best to make the setting and background authentic, I felt free to manipulate the family stories at my disposal, which were, in any case, more like a series of small cameos. For example, I knew what the house may have looked like, there was a warlike forebear with many wives, there was a woman who had a relationship which the rest of the family frowned on.  All these were grist to my creative mill - but were changed in the telling, probably beyond all recognition.
As I've said before on this blog, I have come to appreciate the value of telling a good story and telling it well. Some of my best loved writers do this and they seem to do it as the birds sing, unselfconsciouly. Stevenson, for instance, (and although I would never compare myself with him) is the most unpretentious and accessible of Scottish writers but he has taught me so very much about the virtues of seeking to tell a good story which is 'true' in the wider sense. This is 'made up truth' as another fine writer, Bernard MacLaverty, describes it.
The Winged Hussar presents me with a a different set of problems from The Amber Heart. This is a story which is closer to me in all ways. I never met my grandfather, but I know a lot about him. The temptation (or should that be 'risk'?) will be to make this biographical when, in reality, I am still writing a novel. I need to be able to give myself permission to fictionalise, to manipulate events and characters in the service of the story. And that's always a bit more difficult when you are very familiar with some of the facts. But not impossible.
Research is important. But you have to treat your findings with a light touch. There's nothing worse than indigestible chunks of fact thrown into fiction, just to prove that the writer has done his or her homework. Once again, you are looking for some essential 'truth' rather than a cluster of facts. One of the ways of facilitating this process is to amass materials which allow you, the writer, to become immersed in the background to your story, materials which have a flavour of the time and place. Which is where eBay comes in handy!
I have a great deal of material already, if the truth be told: a few photographs, lots of notebooks and hand-written accounts and sketches from my father, pictures from an artist great uncle, dozens of books, leaflets, pamphlets and Lord knows what else. But browsing eBay, I also found a great many old postcards, which are a wonderful source of background detail, especially when they are real photographs.  I bought the above picture of Lwow or Lemberg (now Lviv in the Ukraine) online, along with several others, all depicting that most beautiful of cities. No wonder my grandmother loved it so much. It was where she was born, and she was never particularly contented with the countryside to which she moved after her marriage. In the event, she returned there in circumstances which were not particularly happy either - and these are part of the story of the novel. Looking at the above picture, from the early 1900s, I was enchanted to see the tramcar, the gaslamps, the attractive and peculiarly Eastern European buildings,  the leafy boulevards, and most of all, the people, not many of them, to be sure, but enough to give me a sense of life going on, a life which was about to be interrupted in every sense. Here's another, from around the same time, with more people. I'm especially taken with the man on horseback. 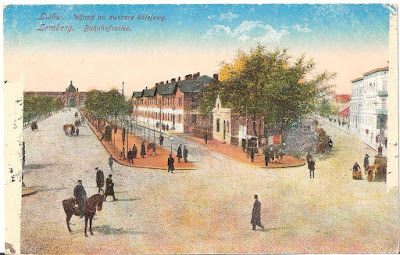 I think one way of handling this material, of allowing it to help rather than to hinder the fiction, will be to keep separate books/work diaries, with these pictures, other material and a bit of writing about my response to them - so that in some way I can keep track of my sources of inspiration, and at the same time allow myself to set them physically as well as mentally to one side, and carry on with the story itself, secure in the knowledge that 'nothing is really lost' along the way. I like the thought of that as a process, and it's one I've used in the past, albeit not quite so formally - my source material is usually pinned up all round the room and stuffed into miscellaneous folders.
I've another thought, though, and I still can't really explain it, but it's part of something that also feeds into the fiction. When I first saw it online, the top picture, St Sophie's Platz, almost leapt out of the screen at me. I knew I had to have it, and I would have paid more for it. Before my father died, sixteen years ago on 20th March, we had seen very few pictures of Lwow. We had none in the family. The only pictures he had managed to bring from Poland had been of the estate where he was born. Although we had talked at length about that place, he had told me very little about Lwow. The online revolution came after he died, so we had never browsed eBay together. Yet of all the picture postcards I found of Lwow - and there are plenty of them - it was this one that gave me a strange and disturbing frisson. It still does. Even now, I can scroll to the top of the page and look at it and feel a little buzz of nervous excitement. I've no idea what part of the city my family lived in, no idea where my grandmother lived, or whether this view, perhaps one of these houses or apartments had any significance for any of them. All I know is, of all the pictures I have looked at, it is this one that I find myself staring at with the most acute sense of familiarity. That's the only word to describe it. It is utterly and completely familiar to me and - in spite of the fact that I had never seen it before in my life  -I love it.  I can practically feel the air on my face. And I have an indefinable sense of something about to happen. As if somewhere in time, this precise place had some significance for me which I can't now remember, which is just out of reach, buried deep in my memory. Which is a spooky but by no means unpleasant experience.

A final thought - my agent's nice new website has just gone 'live' so if you want to read a bit more about me on there, do have a look. They are currently marketing all my fiction, so any professional enquiries should be addressed directly to the agency, here.
Historical Fiction Research