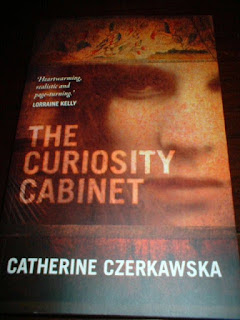 There have been some interesting discussions lately, on Facebook and on various writing blogs, about covers for eBooks  - so here's my take on it. I thought it might be informative to make a comparison between a few of my own covers. To the left is the cover image which was commissioned by Polygon for the print version of The Curiosity Cabinet. It was done by James Hutcheson and I think it's a fine piece of work, in rich reds and browns. Central to the story of The Curiosity Cabinet is a Jacobean casket in 'raised work' embroidery. You can see an image from something similar here.  I know that a real cabinet of curiosities was quite different, but the casket in the novel has been on display in the island's hotel for many years, along with its intriguing contents, and this is what the hoteliers have nicknamed it. There's a scene, early in the book, where one of the characters gazes at the casket and its contents and makes the connection that they are all women's things. She finds herself wondering about the person who once owned them. I think it is this scene which is reflected in the cover. I never met James, although I was certainly asked for cover suggestions, during the publication process, and I think my ideas were taken into account.  I know this doesn't always - or perhaps even often - happen. I've heard tales of wildly unsuitable covers inflicted on writers in the name of 'marketing' - covers which would probably mislead readers about the nature of the novel -  and it would be true to say that there are fashions in cover design, like everything else. For a while, it seemed as though every historical novel seemed to display a nearly headless female in fancy dress, a fashion which seems fortunately to have faded!

When it came to deciding on a cover for the eBook version of the Curiosity Cabinet (now in Amazon's Kindle Store) I was delighted when my friend, distinguished textile and digital artist Alison Bell offered to design a cover for me. She's an 'island' person herself, having lived and worked on the Isle of Arran for many years, and she made the cover (below) as an artwork in response to the book itself. She says 'The narrative works on many layers of memory and time, some hazy, some forgotten, but the island's presence is constant, a refuge and a place to grow and start afresh. I wanted the colours to be soft, subtle, muted, with hints of turquoise, like the sea up there. It is a gentle book which drifts into the mind's eye as each chapter unfolds.'
It was a real pleasure to me to have the artist read and respond to my book - yet another of the serendipitious pleasures of Kindle publishing, tricky as the process may be! 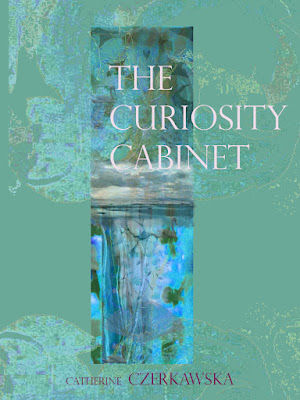 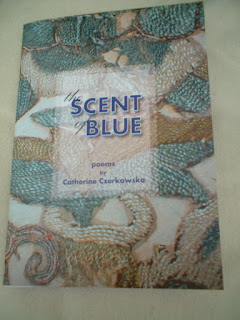 I first started thinking about cover art some years ago, when I published a small poetry collection called The Scent of Blue - mostly poems that had been published elsewhere, in literary magazines and anthologies. I used my own photograph for the cover: a closeup of an antique Chinese embroidery. The designer incorporated that image into the overall design. It was very effective and attractive and I've been complimented on it ever since but it certainly made me think hard about cover image reflecting and in some way interpreting contents. I know how complicated is the connection between design and marketing and how many other factors must be taken into account, such as an overall 'house style' or an image that means that a reader will recognise you as a brand . However I do think that in this brave new world of eBook publishing, we should be just a little wary of succumbing to the same pressures that beset conventional publishing.
We need to acknowledge the expertise of artists and designers, and we will need to buy that in. But I think we also need to reserve the right to take some decisions for ourselves. If we are going to become empowered as writers, then we need to take charge of our covers too. And that may mean taking a 'horses for courses' approach. It may mean working with - and giving free rein to - artists who want to read and respond to a text or it may mean giving an artist a definite brief and I suspect the same writer may want to take different approaches for different books.

When the 'artist response' approach works well - as I think it has for the new Curiosity Cabinet cover - it results in the creation of a companion piece of art with a life of its own. There is much  that can be done with this as an image for an individual book, for an individual writer, rather than a branding exercise for a  publisher. I've had postcards made of The Curiosity Cabinet eBook cover, for instance, and they are a promotional tool not just for me and my book but for the artist as well.

But I'd be the first to admit that this is only one of a number of possible approaches, for an eBook 'cover' is at once more and less than a conventional book cover. The thumbnail hooks the potential reader in, the larger picture reinforces the purchase. I think we have to examine each project individually. I'm currently working on covers for three of my professionally produced plays which I intend to release onto Kindle, and these covers will have a certain similarity of theme, so that they are recognisable as part of a little series. The same goes for stories. But I'm already planning the publication of my next Kindle novel, and I can 'see' in my mind's eye the way I want the cover to look, the way that I want it to represent what is quite a dark, Gothic, Wuthering Heights-ish sort of tale - albeit with a Scottish setting.

All of which leads me to another point - and perhaps a subject for my next post. There is a lot of advice out there. Almost too much. And - of course - I'm only adding to it! When I started out on my writing career, many years ago, there was too little advice. We soldiered on, made mistakes, begged for help where we could find it, and wished that we had learned some things earlier. Now, however, a person with only a tiny amount of experience can represent themselves as an expert. We all need advice, all need to learn, all the time. But when following advice about writing and publishing, do it with your own critical faculties well tuned. If the person giving the advice is an experienced writer or editor, somebody whose work you respect, then by all means take them seriously.  But just be aware that sometimes we have to make our own mistakes and find out what works for us. On the whole, the more experienced the advice giver, the less prescriptive they will be about telling you exactly what you need to do!
art artists Book Covers e-publishing e-readers eBooks islands Kindle The Curiosity Cabinet

Chris Longmuir said…
Very thoughtful post, and I must say I like your cover better than Polygon's one.
August 28, 2011 3:19 pm

Catherine Czerkawska said…
I think I do too, Chris. The new one was Alison's genuine response to it and I think it shows. But I don't think cover artists normally get to work like that. Another benefit of eBooks.
August 28, 2011 4:50 pm

Rosemary Gemmell said…
Love the new ebook cover, Catherine - and I'm about to order the Curiosity Cabinet, although I'm way behind with reading and have loads to catch up with!
August 29, 2011 9:58 am