Bird of Passage - What's In A Name? 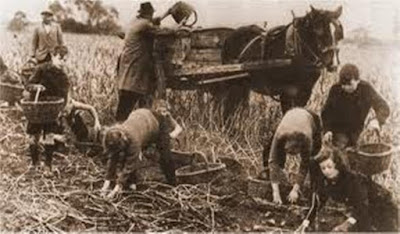 If you have a quick look at the last post but one, you'll see that I was debating over the choice of name for my new novel, the one that I'll be publishing to Kindle in a few weeks time. I've scheduled it for 18th November, and I'll be having a launch event on my author's Facebook page, on or near that date - depends how quickly I can pull everything together. I say 'my new novel' but there are three novels - Bird of Passage, a big, romantic Polish epic called The Amber Heart and a brand new Scottish historical novel, which isn't quite finished, but soon will be, called The Physic Garden. I've scheduled Bird of Passage as an eBook this year, and I'll make some decisions about the others early in 2012. Watch this space!

Don't ask me how I've managed to get so much work ready to go, all at the same time, but a lot of it has to do with being 'distracted' by plays over the years, but wanting desperately to carry on writing prose fiction at the same time. Well, I did carry on writing it, but it's definitely 'mid-list' fiction, which doesn't slot neatly into any one genre. I've been having a hard time selling it in the current market - and that's even with an agent. I've had lots of 'rave rejections' as my colleague Maggie Craig calls them - editors saying how much they love my writing, but 'the marketing department doesn't think they can sell it.'

Only a little while ago, I heard yet another a literary agent talking about the death of the mid-list. Well, I hope she's wrong, because not only do I write it, but I love to read it. Besides, I'm pretty sure she wasn't taking Kindle and other platforms into account.  eBooks are - thank heavens - providing a home for the kind of mid-list fiction that so many of us love - well written, thought provoking novels, telling stories we want to read, a slow burn rather than a flash in the pan - perhaps not wildly experimental or narrowly structured, but absorbing fiction that leaves us satisfied in some deep way.

Anyway, after much agonising and consulting of friends (and then ignoring their suggestions, sorry folks - but the consultation really helped!) I went with Bird of Passage.It seems to me to encapsulate everything that the book is about. The novel has been described as 'Wuthering Heights Meets The Bridges of Madison County.' I've always loved Wuthering Heights, and it did start out as a sort of homage to that novel, albeit with a Scottish/Irish setting, and a story spanning the years from the 1960s to the present. Back when I was regularly dramatising classics for BBC Radio 4 - and although they let me loose on everything from Ben Hur to Treasure Island - they would never let me dramatise Wuthering Heights. I've blogged (crossly) about that before! So I decided that I had to write my own novel.

It's about a boy called Finn, who is sent to a Scottish island farm to work as a 'tattie howker' - the Scottish name for potato harvester. (There's a very old photograph of them above and a painting by my husband, Alan Lees, below.) Even when we moved to Scotland in the 1960s, people still came over from Ireland, usually from Donegal, to dig the tatties. They were sometimes treated very badly, and their accommodation was not the best. In Bird of Passage, Finn strikes up a friendship with the grand-daughter of the farmer, a girl called Cairistiona, always known as Kirsty. 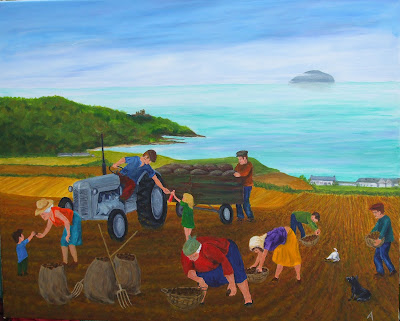 Kirsty becomes a talented and ambitious artist, but her work is inextricably tied up with her love, not just for the island itself, but for Finn, who comes and goes like the mysterious corncrake which visits the island every summer. Finn, however, is psychologically damaged by a childhood so traumatic that he can only recover his memories piece by piece.  What happened at the brutal Industrial School, to which he was committed while still a little boy? For the sake of his own sanity, he must try to find out why he was sent there in the first place, and what became of his mother. As he struggles to answer these questions, his ability to love and be loved in return is called into question. He is the Bird of Passage of the title – a wanderer from place to place, a summer visitor who can call nowhere home.

Looking back at the novel now, I can see that what began as Kirsty’s story, gradually, over successive rewrites, began to change, and began to focus more and more on Finn. I found myself needing to know exactly why he was the way he was. It was as though he was insisting on telling his story and the more I wrote, the more central it became. Now, I think the balance is probably right. Kirsty is still a major figure, but Finn has his rightful place too. And there is a mystery at the heart of the novel that only Finn can solve - for himself, but for us too.
Meanwhile, a young digital artist called Matt Zanetti has done some superb cover art for me, a picture which seems to reflect the feeling of the novel  precisely. A picture, moreover, which convinced me that I had got my title right. But I'll save that for a later post!
cover art Ireland Kindle mid list novels Scotland Tattie Howkers Wuthering Heights