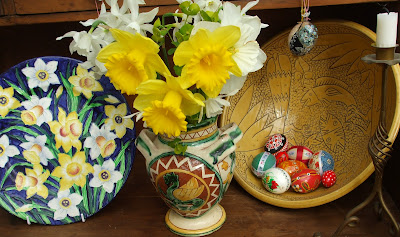 I have a vivid memory of my father - when I was very young - sowing a little tray of grass-seed, a few weeks before Easter. When it grew long and green, he trimmed it back with scissors, and sat a white sugar lamb on the grass. He told me it was what people did in Poland when he was a little boy.
. 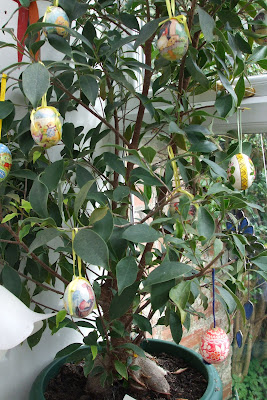 Every Easter, even though he died in 1995, I miss my dad with a great pang of sadness, because here in the West of Scotland - apart from the consumption of industrial quantities of chocolate - nobody takes much notice of Easter as a festival.
I was born and brought up in Leeds, although we moved to Scotland when I was twelve. My best friend at primary school, Olenka Jankowska, was Polish too, and her parents celebrated Easter with as much enthusiasm as Christmas. We always marked the day in our house and followed a number of Polish customs, but I would also join in with Olenka's family over the holiday. The scent of yeast cookery takes me back to that particular time and place, with another little pang of sadness, because Olenka, or Sandra as she was called at school, died when she was in her early 30s. 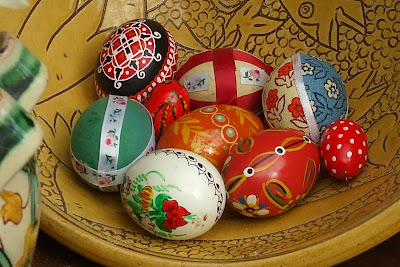 In the weeks before Easter, dad would also paint eggs, sometimes decorating them with pieces of coloured cloth. I have some of them still as you can see from the picture above. You can, of course, hard boil eggs, paint them and then eat them, but if you want to keep them from year to year, you have to prick a hole in both ends and 'blow' the contents out (to be used for your Easter cookery). It works, honestly!
In Poland, little baskets of produce, eggs, ham, bread, would be taken to church to be blessed by the priest. On Easter morning, people say 'Chrystus zmartwychwstał!' meaning 'Christ is risen!' to which the traditional response is 'Zaiste zmartwychstał!' - 'He is truly risen!' 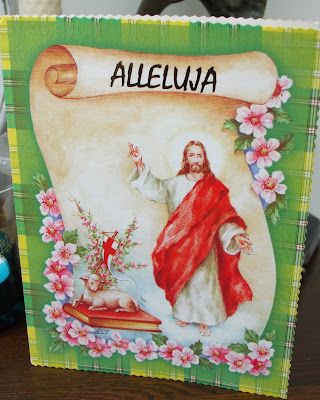 Olenka's mum baked the best cakes I've ever tasted, especially at Easter: big trays of apple and plum yeast cakes, 'sernik' or baked cheesecake on a pastry base, dense and luscious .The Easter meal always involved heaps of hard boiled eggs, fat frankfurter sausages, rye bread with caraway seeds, big dill pickles, sauerkraut, soft cheese and salads of all kinds. It was probably my favourite meal of the whole year. Later, even when I was grown up, dad would make delicious pastries, called 'chrust' and 'favorki' (favours) like a cross between a doughnut and a biscuit.
On Easter Monday, known as 'Wet Monday' in Poland, dad would usually manage to get up early so that he could drench us in water. We would always forget what day it was. Back in the late 1970s, when I was teaching English conversation at Wroclaw University, it wasn't just water that you had to avoid. If you weren't careful, you would be drenched in cheap perfume, which would stay with you for days. 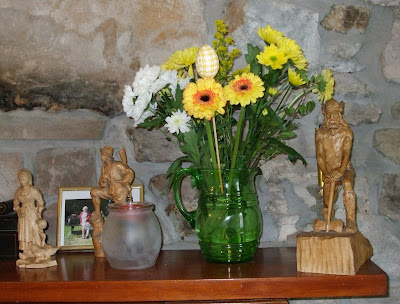 I try to replicate some of these celebrations each year and to some extent, I'm successful. I bring in greenery and put out my painted eggs. I do some yeast cookery. I've even invited some friends to an  Easter tea in the past  - but it's never quite the same and I just finish up by being faintly sad.
I've decided that the missing ingredient which I can't supply is belief. I myself can embrace the season and celebrate it. I can go along with the magic of it all. It still gives me a little thrill of excitement.
But nobody around me can. So I'm fighting a bit of a losing battle. 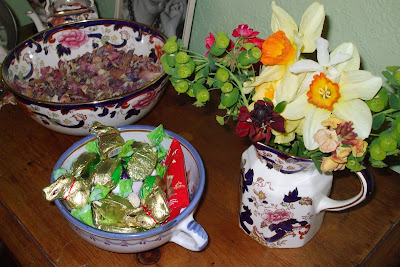 Kathleen Jones said…
I know what you mean Catherine. Here in Italy, Easter is the next biggest thing to Christmas and there are events over about five days with lots of meals and cake eating and family outings. It's wonderful. Today was the day for visiting the cemeteries with candles and flowers. Tomorrow there will be the processions of light - Sunday is the big family meal and on Monday all the families go up into the hills to picnic at the refugios - you can't go anywhere in the hills, however remote, without the sound of chattering and the smell of barbecues. It makes Easter in England positively boring. But the main thing is that it means something to the Italians. I can enjoy the spectacle as an observer but I'm never going to be able to participate in the same way.
April 05, 2012 8:41 pm