The Curiosity Cabinet: Where Did I Get My Ideas From?

July 16, 2012
A few days ago, just as I was thinking of writing this piece about The Curiosity Cabinet, I had an email  from friend and fellow writer Shirley Mitchell, who wondered if the 'cabinet' of the novel just might have been inspired by one of her children's stories, published some years ago, in which there was a 'curiosity cabinet'. As it happens, it wasn't, or not to my knowledge - but it very easily might have been and it would have been very nice if it was.

It's one of the most commonly asked questions when writers are giving talks and readings: 'where do you get your ideas from?'

You're always tempted to say things like  'Ideas R Us' or 'That big Scandinavian shop called Idea - they come in flat packs with free tea lights.'  But actually, it's a good question. The fact is that inspiration comes from a million different sources and it can be very hard in retrospect to figure out how the ideas all came together to make a novel.

With the Curiosity Cabinet, there were three very definite strands of inspiration, all of which collided in my head - and in the resulting novel. Four if you count the fact that I wrote it first as a trilogy of plays which were broadcast on BBC Radio 4.


The idea began when I was in Edinburgh - probably when I was working on yet another radio play. The drama studios were in Edinburgh at that time. I went to an exhibition and learned about poor Rachel Chiesley, Lady Grange, who was 'kidnapped' from her home in the city in the early 18th century, and carried away to St Kilda, where she spent many desperate years in horrible isolation. There has since been an excellent book written about these events, The Prisoner of St Kilda by Margaret Macauley but at the time, I found myself piecing the sad story of Lady Grange together from various sources. What fascinated me about the story was the way in which the two cultures of Scotland, Highland and Lowland, were so very different, a difference which I had already found myself exploring in some detail when I dramatised Stevenson's Kidnapped and Catriona for Radio 4. I found myself thinking 'what if' - which is perhaps how all novels start. What if the person kidnapped was a young woman. What if she (and the readers) had absolutely no idea why she had been spirited away from everything she held dear? What if she had left a child behind? (I had a young son myself at the time.) Could she ever begin to adjust to her changed circumstances, to her changed surroundings? Could she ever change her perceptions of what seemed to her to be a savage place?

At the same time, though, another idea was fermenting away in my mind. I found myself visiting Glasgow's Burrell Collection on various occasions and it was invariably the needlework that drew me. I've loved antique and vintage textiles for as long as I can remember. My mum used to go to the saleroom and I used to go with her, but although she was mad about pottery and porcelain, I was fascinated by the textiles: the embroideries, the linens and lace. Still am. 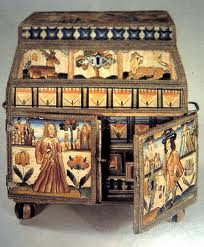 When I visited the Burrell, therefore, I particularly loved the embroidered 'raised work' cabinets with their wonderful little scenes of all kinds: the figures and flowers, the birds and beasts and houses. I always found myself daydreaming about what it might be like to possess something like this, but also about the women who might have made them - and the objects they might have kept in them. The needlework pictures so often seemed to tell stories, to symbolise things which were important to the women who had so lovingly embroidered them. Not only that, but the very act of stitching seemed to me to imbue the resulting work with the emotion of the maker, quite as much as a painting or sculpture. Of course, these were not really 'curiosity cabinets'. Cabinets of Curiosities were usually masculine affairs, collections of rare and wonderful specimens of all kinds, shells, fossils, bones and the like. But the embroidered casket of my imagination was a very different kind of Cabinet of Curiosities. I saw it vividly in my mind's eye, full of a collection of fascinating objects: shells and feathers for sure, but also a number of personal possessions, stored away there for three hundred years. And in my imagination, I saw too that they were all women's things. In order to write the novel, I had to find out who those women were, and what was the story of the casket, The Curiosity Cabinet of the title. 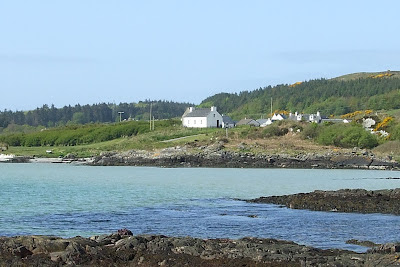 My third strand of inspiration was the Isle of Gigha. My husband first introduced me to this magical place. Many years previously, long before we met and married, Alan had been diving for clams off Gigha and the boat's engine had broken down. He and his brother-in-law, working together, had been 'rescued' by the islanders, who had offered them hospitality and engineering expertise in about equal measure. After we were married, and especially after our son was born, we went there often. It's still one of my favourite places in all the world. I even wrote a big history of the place called God's Islanders, very much a labour of love, published a few years ago by Birlinn.

So when I was thinking about a setting for The Curiosity Cabinet, and although the island in the novel is fictional, and could be any one of a number of small Hebridean islands, it was the Isle of Gigha with its white sands, its honeysuckle and foxgloves, its dazzling coconut scented whins that was always in my mind's eye. 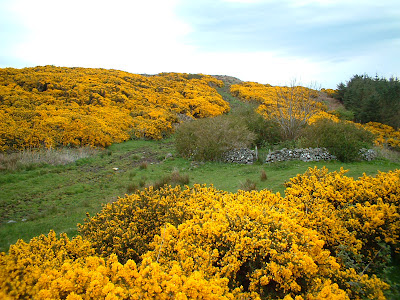 Although the historical story in the trilogy of radio plays - the tale of Henrietta Dalrymple and Manus McNeill - is more or less the same, the present day tale is very different. I was never satisfied with that aspect of the radio trilogy and when I came to write the novel, it took off in quite different directions. I decided that I wanted to write two parallel love stories - one set in the past and one in the present. This was never going to be a conventional 'time slip' novel and although there are suggestions of the supernatural in it they are very subtle indeed and never overt. I suppose what I was aiming for was a suggestion that sometimes the past might just possibly influence, or might be worked out in the present. Or then again not! Without imbuing the whole thing with some kind of spurious Celtic twilight - I still wanted to illustrate the feeling you occasionally get on these Hebridean Islands, the vague sense that you are in a 'thin' place where the boundaries between this world and another are so fine that sometimes you can see through them. But all the same, I wanted it to be real. And in order to make it and keep it real, I had to pare it down as far as I possibly could, but still keep it involving and sensuous.


When an American reviewer, Lorissa K Evans, wrote of the US Kindle edition, that 'the writing ,,, is so tight you could bounce a quarter off of it' I was delighted.

I submitted the final draft of the novel for the Dundee Book Prize. It turned out to be one of three books shortlisted that year, and was published by Polygon in Edinburgh. Feedback and reviews were excellent. A lot of people seemed to enjoy it and the edition sold out. Eventually, the rights reverted to me and since I was seriously considering indie-publishing by that stage in my career, it was one of my first ventures on Amazon Kindle where it seems to have had a whole new lease of publishing life. My friend, Scottish textile artist Alison Bell, gave me the new eBook cover image as a very beautiful gift.

You can download it here in the UK and here in the USA. One of the nicest and most perceptive reviews so far has been by Hilary Ely, on Vulpes Libris It's so lovely when a reader completely understands what you were trying to say in a novel and why you were telling the story in the way you did. There's no feeling quite like it!

If you're curious about the story, interested in Scotland, especially small Hebridean islands and fancy some holiday reading with a difference, The Curiosity Cabinet will be free to download on Amazon Kindle for three days,17th, 18th and 19th of July.