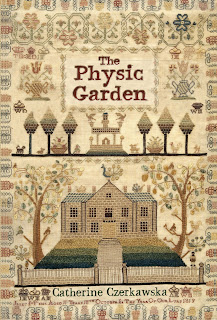 The Physic Garden is on special offer on Amazon at the moment - 99p for the eBook, and I'm not at all sure how long that is going to go on! It could go back to full price any moment, so if you're reading this and have missed the boat, apologies. Not that it's terribly expensive at full price. And because the cover is so beautiful - many thanks to Glasgow Museums for supplying my publisher, Saraband, an image of a sampler that was not only right for the novel, but pretty much right for the date too - the paperback is a lovely book as well. It's one you might be glad to have on your shelves, even if, like me, you prefer reading novels on a Kindle.

Did I really say that? Well, I'm afraid it's true. But sometimes, when I like a particular book a lot, I want to have it in both versions.

And I'm a small time collector of antiquarian books as well, so my shelves are fairly cluttered with old volumes, not even very valuable old volumes either: just extremely pre-loved.

I really do like the smell of those. I honestly don't care about the scent of new books, even my own new books. They sort of smell of paper and nothing else and so does bog roll or printer paper. But old books, very old books - oh, like old textiles, they smell of time, and the perfume of the past, and I can get quite sentimental over those.

When I was researching the Physic Garden - a book I sometimes think I ought to have called The Psychic Garden, because that's what so many people want to call it! - it struck me that my narrator/gardener/bookseller, William, of whom I'm still very fond indeed, would have known all about Robert Burns. The lives of the two would have overlapped, in terms of time although they would never have met. Burns would have died only six years before William first met his sweetheart, Jenny Caddas, taking her swarm of bees. So when William, whose narrative voice was so strong that I was never quite sure what he was going to say next, mentions Robert Burns, and the challenges he must have faced in the houses of the Edinburgh gentry, it seemed perfectly feasible. 'But then, I believe, the poet's father was a gardener too, and it was that work which first took him to Ayrshire where Rab was born,' writes William.

Much more recently, as regular readers of this blog will know, I've been finishing a new historical novel about Jean Armour, the wife of that same Robert Burns. This is no coincidence. I was already immersed in the time and place and had previously written a couple of plays about the poet, but had always wanted to write more, a lot more, about Jean.

Because the new novel, titled The Jewel, is primarily about Jean, the poet's father - also called William - only figures peripherally. He was dead by the time the family moved to Mossgiel farm outside Mauchline. He comes across in most of the biographies as a kindly father, intelligent and thoughtful but very strait-laced and rather grim. His son felt that his father was disappointed in him. Yet it struck me that William  Burness, as he signed his name, must have had some spirit of adventure as a young man. He moved from the North East where he was born, first to Edinburgh to work as a gardener, and thence to Ayrshire. Moreover, he met Agnes Broun, the poet's mother, at the fair in Maybole and married her with a certain amount of precipitation, so it must have been a whirlwind courtship! Perhaps the poet, whose chief virtue was genuine kindliness and who could be impulsive, was more like his father than he knew.