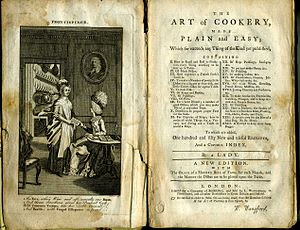 Among Jean Armour's possessions, was a cookery book: the Art of Cookery Made Plain and Easy, by Hannah Glasse, first published in London in 1747. We don't know how much Jean used this book, although I think we might safely assume that it was a gift from her husband, who was in the habit of buying books, especially second hand books, and might have picked this one up for her alongside his own treasured volumes.

We do know that Robert Burns had plain tastes. He preferred simple meals, simply cooked, and wasn't even very keen on puddings and pies. This could be deduced from his poem in praise of the haggis, in which he scorns complicated French cooking, but his wife herself tells us that he didn't like fancy stuff. Not for him the eighteenth century equivalent of the Burns Supper trifle in the shape of custards and syllabubs. Nevertheless, Jean - who had learned how to make sweet milk cheese, and who was a well brought up lass - may have been more interested in the art of cookery than her husband. I find myself wondering if she thumbed through her copy and occasionally experimented.

When I was researching The Jewel, my new novel about Jean, I bought a facsimile copy of Hannah Glasse. I've always been fascinated by old cookery books, ever since I came across an antiquarian book of recipes lurking somewhere on the stacks in Edinburgh University Library, back when I was a Mediaeval Studies student there. It struck me even then that it would be possible to try out some of the recipes, that the history of cooking might be an interesting field of study, more interesting than the Middle English with which I was wrestling.  But this was the 1970s, and I was way ahead of my time. I filed it away in my head, intending to come back and look at it later. Of course I never did, but it's something I've always regretted.

But back to Hannah Glasse. Among the many and varied recipes showing the housewife how to boil tongues and pigeons, how to roast tripe and how to make Scotch Barley Broth (I assume Rab wasn't averse to that one!) there are a great many enticing recipes for sweet puddings, including 'cherrie pies', custards, 'mackaroons' and little plum cakes and fine cheese cakes all of which sound delicious.
There are specimen menus, recipes for cider and other alcoholic beverages, but also for stewed calves' feet and eel soup for Lenten fare. (Not quite so delicious.)

One interesting recipe caught my eye:
'An approved method, practised by Mrs Dukely, the Queen's Tyre-Woman (I assume this refers to the queen's attire) to preserve Hair and make it grow thick.
Take one quart of white wine, put in one handful of rosemary flowers, half a pound of honey. Distill them together, then add a quarter of a pint of oil of sweet almonds, shake it very well together, put a little of it into a cup, warm it blood warm, rub it well on your head and comb it dry.'

All of which sounds pretty good to me, apart from a certain stickiness in the application. But there is no mention at all of washing it out. I suppose the hair would be nice and shiny and pretty thick, but the risk of attracting bees and wasps in season would probably outweigh the benefits of all that rosemary and sweet almond oil ...

Who among my readers is going to give it a try? I must admit, it does remind me, faintly, of those noxious mixtures I used to make when I was a child and try out on my patiently loving grandad. Just don't blame me if it takes you hours to get the oily stickiness out of your hair! It'll be all Hannah Glasse's fault. Or Mrs Dukely's.

Meanwhile, watch this space for more news of the Jewel, which is due to be published on 1st May this year.

Susan Price said…
I'm looking forward to 'The Jewel'!
Great post - I enjoyed it.
And yes, 'tyring' was 'attire' and dress. In Shakespeare's theatre, the room where the actors changed costumes was 'the tiring' or 'tyring-house.' And Raleigh wrote:

Catherine Czerkawska said…
Lovely quote, Sue! I thought it must be that.