February 14, 2016
Valentine's Day seems appropriate for this post about Wuthering Heights, my favourite novel of all time. But is it really a love story? Or an exploration of a fierce, ultimately destructive obsession?

I'm well aware that it is the Marmite of novels. Not everyone loves it and those who don't love it tend to hate it just as passionately. Me - I love Wuthering Heights and Marmite too, but I love the novel more.

It's one of those books, one of those stories, that seems to have been in my consciousness for ever and certainly long before I was old enough to understand what it was all about. It was my mum's favourite book and the old movie, with Olivier as Heathcliff and Merle Oberon as Cathy, was a firm favourite with her too but it was many years before I saw it.

I was born in Leeds and lived there until I was twelve. We would take the bus to Haworth occasionally and walk across the moors to Top Withens, the ruined farmhouse which was said to be the situation, albeit probably not the building, of the Heights. Ponden Hall - now a B & B with enticingly brilliant reviews - is roughly situated where you might expect to find Thrushcross Grange in the novel, although it is said to be much more 'like' the old farmhouse of the Heights. And one of these days, I will go and stay there and will sleep in the wooden cabinet bed and think about Cathy and Heathcliff, and poor, silly, haunted Mr Lockwood. It's on my bucket list.

I listened to a lot of radio when I was young - mostly because I was a very sickly child - and would spend hours, days and weeks 'dramatising' Wuthering Heights just for fun. Ironically, although I subsequently had a long and successful career as a radio playwright, and dramatised all kinds of classics including Ben Hur and The Hunchback of Notre Dame, the novel they would never seem to let me 'do' was Wuthering Heights. It still saddens me and even now I'd leap at the chance.

Later, as a young woman, I did a lot of wandering across the hills, although we were living in Scotland by that time so these were the Galloway hills rather than my beloved Yorkshire moors. And later still, I realised what a savage, sadistic, raw and elemental novel Wuthering Heights is. Not a love story at all, in the romantic sense. Or not any kind of love you might want to experience in real life.

Even later, when I moved on from radio and theatre plays to novels, I wrote a sort of 'homage' to Wuthering Heights in the form of a novel called Bird of Passage.  It's currently available on Kindle with a lovely cover by artist Alison Bell, but there will be a paperback edition, later this year. Of course, it isn't a retelling of the tale. How would I dare? But it is a re-imagining, and a homage to the original, in a remote, rural Scottish setting, an exploration of obsessive love and those who fall victim to it. 'A dialogue with the older book' as Susan Price said, reviewing it for the Awfully Big Blog Adventure site. 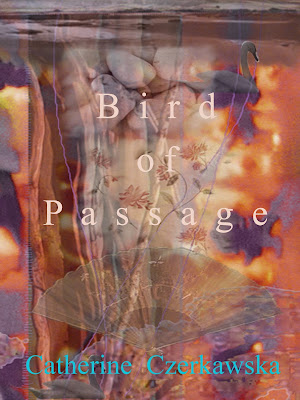 Meanwhile, in honour of Valentine's Day, I'm rereading the original, the greatest and best, Wuthering Heights. On my Kindle Paperwhite. There is nothing quite like the peculiar intimacy of reading a well loved text on a Kindle, in the dark. It's as if there's almost nothing between you and the author's mind. Far from the conventional wisdom on this, I prefer it to paper, find myself noticing things in the text that I never saw before. Even with a novel that I thought I knew as well as anything I have ever read.

Finally, if you love Wuthering Heights as much as I do, and you haven't read Emily Bronte's poems, you should try them.


Still, as I mused, the naked room,
The alien firelight died away;
And from the midst of cheerless gloom,
I passed to bright, unclouded day.

A little and a lone green lane
That opened on a common wide;
A distant, dreamy, dim blue chain
Of mountains circling every side.

The heaven so clear, an earth so calm,
So sweet, so soft, so hushed an air;
And, deepening still the dream-like charm,
Wild moor-sheep feeding everywhere.

That was the scene, I knew it well;
I knew the turfy pathway's sweep,
That, winding o'er each billowy swell,
Marked out the tracks of wandering sheep.