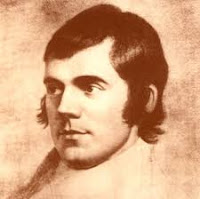 Anyone who knows me well, will know that I'm a big Poldark fan. But at least one of the reasons I watched it so avidly, is that it was perfect inspiration when I was writing the Jewel. The period, the costumes, the scenery, all of them were exactly right for the turbulent romance between Rab and Jean. And it needed only a small stretch of the imagination to see Aidan Turner in the starring role. (I know there are brilliant young Scots actors in plenty, suggestions welcome below, but I'm sure he could 'do' the lowland Scots accent if necessary!)

I thought it was just me, daydreaming while simultaneously working on a novel and watching what I thought was an excellent adaptation, beautifully filmed, brilliantly acted, (the first series coincided with a time when I was researching and writing the novel.) But last week, I was speaking about Jean to a group of volunteers at one of the local Burns museums and somebody else - a man, no less - said 'You know, Poldark put me in mind of this story. Whenever I watched Ross Poldark and Demelza galloping along that clifftop, I thought about Rab and Jean!'

There have been so many attempts to make a film about the life of Robert Burns, but most of them have come to grief or come to naught in one way or another. I realised, as I worked on The Jewel, that it may be because most of them have ignored the real, romantic heart of the story. Ross Poldark would be unthinkable without his brilliant, strong, spirited Demelza. There's a sense in which the novels, the dramatisations too, are Demelza's story. And there's a sense in which the story of Robert Burns is just as much Jean's story - another brilliant, strong, spirited woman. If you try to make it about Highland Mary - a short intense relationship - or Clarinda - another intense but short relationship, mostly conducted by letter - then you miss the real, dramatic, romantic heart of the matter.

The other problem is that too often, Rab is played by an actor who seems to be a bit too old for somebody who died at the age of 37. It matters. During one of this year's many excellent discussions I've had with groups of readers, somebody remarked on how young the couple were when all the drama of their relationship was at its height. And it's true. They had all the passionate recklessness of youth and you ignore that at your peril.

Meanwhile, as far as I know - because there has been interest  - film rights in The Jewel are still available. Contact Saraband if you want to know more. I'd truly love to see this book on the screen.