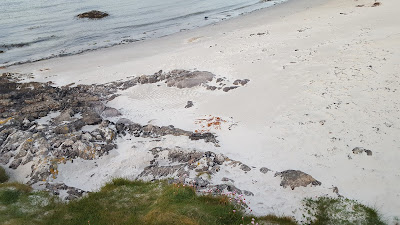 In the Curiosity Cabinet, I created a fictional Scottish island called Garve. In writing The Posy Ring, the first of a new series with the same setting, I've deliberately set out to find out even more about it. It's an Inner Hebridean island. It's medium sized: bigger than Gigha but smaller than Islay. It sits somewhere between Islay, Jura and Gigha but like the mythical Celtic Tir nan Og, there's a nebulous quality to its situation. Of course the characters know exactly where it is, but readers should be able to speculate a bit!

In the Curiosity Cabinet, I could permit myself to be vague. I knew a lot about the landscape of my fictional island of Garve or Eilean Garbh. The name means 'rough' in Gaelic, and I knew that this was an island that might indeed look a little rough from the sea. Trees would have been planted only later in its history but it would still be a softer landscape than those of the Outer Hebrides. There would be wild flowers in plenty, some trees and some decent grazing, although the upland parts of the island would be less hospitable.

But now that I've been working on the first of a series of novels with the same island setting, I've spent a while happily working out the entire landscape of my made up island: the houses, the villages, the farms, the archaeological remains (a great many of these) the harbours, the roads and where the streams flow through the landscape. My husband has drawn out a map and I've been filling in names and places.

Many years ago, at my primary school, I remember working on a 'desert island' project. We were given a board each and lots of old fashioned plasticine. I can smell it now! We were encouraged to make an island of our own. We could bring in things from home: beads, feathers, flowers, sticks, anything that we thought might enhance our island. I can remember being practically obsessed with it for weeks.

I recognised those same feelings all over again when I was creating my fictional island. I've spent ages poring over my makeshift map, writing in place names, putting in landscape features, imagining what it would look like and feel like to be there, with my two feet on the ground. Inhabiting it, just as my characters do. Now my artist husband is painting a colourful and rather more arty plan of Garve, but I'm still engrossed by my bigger map, deleting things here and there, adding things too. It is displacement activity, for sure - but it's also a necessary part of creating a world that really hangs together, that exists in my imagination.

It now seems so vivid to me that I daily feel a certain amount of disappointment that I can't actually hop on a CalMac ferry and visit it in reality. Most writers spend a large part of their lives living in their own heads, so to speak, and this is a prime example. Garve and its people have become as real to me as any other place that I know and love.

alison333 said…
There's much to be said about inhabiting imaginary places, particularly islands. The need for psychological escape, away from our realities, is increasingly significant. I feel that artists too inhabit imaginary spaces out of a creative necessity to be alone, solitary, isolated and away from prescribed realities. I'm all for that.
July 10, 2017 7:52 pm