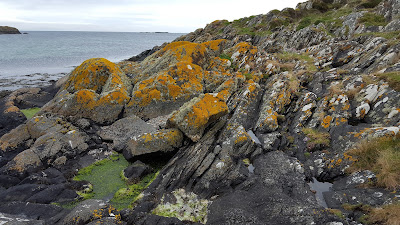 I've been neglecting my blog again, mainly because I've been working on a new novel, called The Posy Ring. It's a spin off novel to The Curiosity Cabinet, set on the same fictional Scottish island of Garve and since I'm some 75,000 words into it I can at least begin to talk about it!

There's a point in any new project where not only does it not seem to exist at all, but where you begin to doubt that it ever will be a living, breathing thing, as opposed to a random heap of words. I've been through that and out the other side, and although I'm still not 100% certain that the light at the end of the tunnel isn't an oncoming train, I have high hopes that I will emerge blinking into the daylight in a month or so.

People often ask me what kind of novels I write and they're already asking what this new novel, the first of a series, is 'about'. I've always found the question difficult to answer precisely.  I write a certain amount of well researched historical fiction, and the new novel is at least partly that. The story deals with events in the past and present, but, as in the Curiosity Cabinet, nobody goes back in time. Rather, I'm telling two parallel tales in the same fictional setting. And that setting has a profound influence on both stories.

I remember being startled a few years ago, when a colleague introduced me as a writer of 'romance'. Now I'm fond of a good romance, but the term - which used to be a very broad one - seems to have become synonymous with a certain structure of story, especially one aimed only at female readers (but sometimes written by men) and almost invariably with a happy and upbeat ending.

I often tell people these days that I write 'grown up love stories.' They are, I hope, about recognisably real men and women and they don't always end happily ever after. The Physic Garden is a good example although there, the central 'love story' mostly concerns a friendship between two men. (OK, it's a bromance!) It's also a book about an extreme betrayal which leads to tragedy. There is a happy ending of sorts, but like real life, it's equivocal and happens many years after the event.

The Jewel is about the relationship between Robert Burns and his wife Jean Armour.  That certainly was a very grown up love story - arguably Scotland's greatest - and if we know anything about the poet's life, we know that it isn't going to end with them living happily ever after. Or not for very long.

The Curiosity Cabinet involves two distinct love stories, one past and one present. The Posy Ring is heading the same way, but there is, I find, a significant element of this new book that involves love for a house and its contents. And for an island. The quality of mystery and excitement is there. Love is there too. But it's also about a search for a sense of belonging.

Maybe though, we just need to reclaim that word 'romance' which is a perfectly good word after all. Perhaps we need to go with a much broader definition. I have many friends who write 'romances' but they all, even within the more conventional parameters of that genre, write quite differently. Looking it up, I found it described as 'a feeling of excitement and mystery associated with love' and  'a quality or feeling of mystery, excitement and remoteness from every day life.'  These are fine as far as the mystery and excitement go, although many fine romances seem to be firmly rooted in everyday life - and none the worse for that.

Back when the Curiosity Cabinet was submitted for the literary prize for which it was eventually shortlisted, one of the readers remarked that it was a 'guilty pleasure'. Even then, I wondered what was guilty about it, and why, since he then went on to say that it was well written and involving. The only conclusion I could reach was that it is essentially a pair of parallel love stories and he felt guilty for enjoying it only because of the subject matter, whereas, presumably, he wouldn't have felt quite so guilty about reading and enjoying a novel involving the extremes of murder and mayhem.

This is not to say that everyone has to like everything, because patently they don't. I don't like too much gore in my reading, for example, but I know a lot of people who do. It's when we start to make value judgements on the basis only of subject matter that we run into trouble. I thought I didn't like 'fantasy' much till I discovered the amazing China Mieville. Perhaps we should all decide to take genre labels with a pinch of salt and be a bit more adventurous in our reading.

Perhaps we need to indulge ourselves in a bit more pleasure without any self imposed guilt.