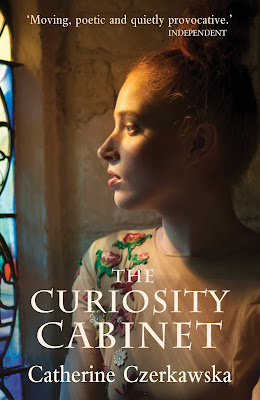 The other day, I had one of those insights that I think it might be worth sharing for the benefit of anyone embarking on writing a piece of fiction for the first time. (I hate that word 'budding' when applied to writers, so I'm not going to use it!)

Throughout the summer, I've been working on a new novel called The Posy Ring, with a past and present dimension, so I've been with two different people at different times telling two intertwined tales in the third person. Nobody goes back in time. These are parallel stories with connections between them.

In The Jewel, we are with Robert Burns's wife Jean Armour herself. But even though the whole story is pretty much told from the point of view of Jean, it's another third person narration. I wanted this to be her tale, but I also wanted to be able to have more of an overview than would have been possible if I had tried to tell the story wholly in her Ayrshire voice. The voice is there, of course. How could it not be? But I found I needed just a little distance which is what the third person narration gave me.

Today, though, I'm thinking about first person narration. I used this in The Physic Garden, mainly because William Lang, the main character in that novel, needed to tell his story and it seemed the only possible way of telling it. His voice in my head was very strong. I did, however, borrow a technique from that finest of writers, Robert Louis Stevenson, and made sure that an older and more experienced William was telling the story of his youth. This is the technique used to such good effect in Kidnapped, where an older David Balfour is telling the story of his brash younger self.

Sometimes when I read a novel written in the first person, especially from the point of view of the heroine, I find myself tripping over a certain aspect of the narration. For what it's worth, here's why. We are not, most of us, models of self confidence. When the older David Balfour looks back on the young David he finds himself doing what most of us do from time to time (usually in the middle of a sleepless night) and cringing at our own thoughtlessness or selfishness or bad behaviour. William does much the same in The Physic Garden, as well as trying to rationalise and come to terms with and forgive a terrible betrayal.

But even without that narrative distance, we do not, on the whole, gaze at ourselves in mirrors and notice our bouncing curls or our snub noses or our mouths, 'just too large for prettiness.' We do, sometimes, get up in the morning and gaze at ourselves and think 'what the hell happened?' And the older we get, the more inclined we are to think 'who is that elderly person gazing back at me?'

We are often beset by genuine doubts and uncertainties, by uncomfortable memories, hesitations, and the inconvenient and sudden desire for unsuitable people. But we hardly ever describe ourselves to ourselves in terms of our appearance. We reserve that for the few occasions when we are meeting strangers, and even then, we tend to say what we'll be wearing. Or send a picture.

Why, then, do so many heroines indulge in this form of self description? Tell us what your character feels. Tell us that she can't decide what to wear, and why she finally chooses some article of clothing. Let her express her doubts and fears, her memories, her wishes for the future. Let her tell us how she feels about the hero, if you're writing a love story. Or let the hero tell us what he sees and feels and why he likes or loves what he sees. But be very wary of those mirrors because they can become a cop-out.  Please, please, please don't have her gaze 'critically' in the mirror and then describe her own unruly curls, her green eyes, her inconveniently slender figure, her tiny feet, her long fingers, and so on, while this reader at any rate thinks 'aye right.'

In the Curiosity Cabinet, the heroine is given a mirror, but she doesn't want to look in it - not at first. The reason is that she has had smallpox, and it has left her with scars. She has seen them once, as a very young woman, and after that has avoided the sight of her own face. She doesn't gaze on those scars at all and the point in the story where she is eventually persuaded to look in the mirror is vital to that story, but not because of what she sees. Rather because of who persuades her and why.