Antique of the Month: My Beloved 'Squire' Piano.

Because my new novel, The Posy Ring, due to be published by the ever excellent Saraband in 2018, involves antique dealing, among other things - I thought I would begin to write an 'antique of the month' post. And since I've just had my wonderful old piano tuned, it seems like a good idea to begin with this instrument.

I acquired my upright 'cottage' piano when we first moved to Scotland from Yorkshire, and I've had it since I was twelve years old. That's a very long time, and I love it dearly. I had been learning to play the piano since I was seven years old. My first teacher was a formidable but kindly woman called Miss Ingram who taught at Leeds College of Music in the late 50s. I can remember the head of the college saying that she was an 'iron hand in a velvet glove' and my seven year old self finding this vaguely alarming because she wore little fingerless gloves when she played and taught. The college was in a big and decidedly chilly old building at the end of Wood Lane, in Headingley and I always wondered if the mittens were concealing the iron! She had short grey hair, she wore a faintly Bohemian black velvet jacket over a pleated skirt, she massaged Nivea cream into her hands to keep them supple (the scent of it still takes me back to that time and place) and cleaned her piano keys with milk.

We must have had a piano in the house then, although I don't remember what it was like. But I suspect it had once belonged to my aunt Nora, my mother's much older sister, who was a fine pianist. In fact she had been offered a place at that same college of music to study full time, but she never took it up. Back then 'people like us' - working class people - didn't do things like that, and she  played only for pleasure. Being a good deal older than my mum, she had also - so I'm told - played to accompany the silent movies in the local cinema, when she was still a girl. It was when my mother married my Polish father that things changed, for me at least. 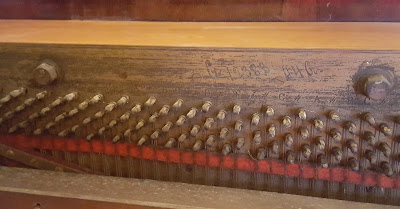 When I was twelve, we moved to Ayrshire and my mother bought me a good piano in the local saleroom. There were two salerooms in the town of Ayr back then, and I can't remember which one it came from but it could easily have been from our single surviving saleroom - the one I visit pretty much every week - Thomas Callan. Mum and dad found me a new music teacher in Ayr and I carried on with my piano lessons until I went off to university in Edinburgh at the age of seventeen, by which time I had reached Grade 7 and was reasonably competent, although I was only ever going to play for fun. 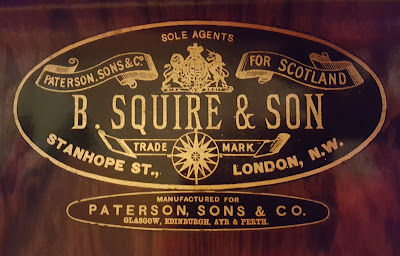 The piano has been tuned by the same person for all those years, a man called Paul Cohen, who is not only a fantastic tuner, who knows all about old instruments, but a brilliant musician in his own right as well. Every time he comes to the house, he marvels at just how good this lovely old piano sounds, because - he says - it IS old. In fact he reckons it dates from the late 1800s! It lives in our cottage sitting room and since the house is much older than the piano, having been built in 1808, and not particularly overheated, the piano seems very happy here.

This time, when he had taken the front off, we examined it more closely, and I took some pictures. The piano was sold by Paterson, Sons and Co but the maker is B Squire - Squire was an old and distinguished London company of piano makers, and when the original Mr Squire died, his wife Betsey took over, in the middle of the 19th century, and thereafter the firm was known as B Squire and Son. Inside, there's a serial number, 17420,  which we can't find anywhere else, but fascinatingly there's also a price of 44 guineas. Which - when you think about what people earned in those days - makes this a very expensive purchase indeed.

I've played it for many years, sometimes more and sometimes less frequently. Our son had lessons for a couple of years when he was a wee boy, but as his lovely teacher, Lisa Occleston, observed, he was never going to enjoy it much. So when he stopped, I took his lesson slot, to refresh my memory, and a high old time we had every week, while I learned some quite demanding pieces of music. That came to an end when Lisa moved away, and again, I neglected my piano for a while. I always tend to play more in winter than in summer.

Now I've dug out a heap of music, the piano has been tuned, and I plan to spend a lot more time this winter, refreshing my memory all over again. That's the huge benefit of learning to a certain standard. Even though you neglect it for a while, you don't really forget and can pick it up again with a little application.

Paul tells me that pianos can hardly be sold these days. Everyone has gone digital. Which seems a pity. When all these gorgeous old instruments have been broken up, they'll probably become valuable all over again. But I wouldn't willingly part with it. And anyway - I don't think we could move it! 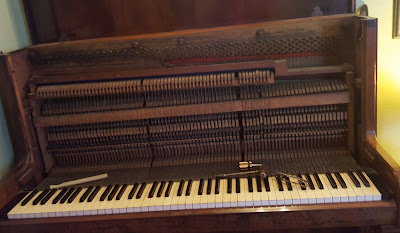 Julie said…
Ours is an upright elderly model, though not nearly as decorative as yours. I love your candleholders. Ours is a Kemble of London and the tuner says it's a good one. We didn't buy it new; in fact, I think someone who was downsizing gave us it. All our children (and I) learnt on it. My youngest son is still playing - semi-professionally. I'm trying to attach a pic of his CD, but I doubt if it'll work - so I'll send it separately as an attachment to an email.
November 02, 2017 11:42 am

Catherine Czerkawska said…
Thanks, Julie. They become part of the family, these old instruments, don't they?
November 02, 2017 1:05 pm