Antique of the Month: A Precious Reminder of My Polish Family History

I might fit in more than one antique this month. After all, Christmas is a time when this old house really comes into its own and it's nice to reflect on the history of a few precious possessions - not particularly precious in terms of monetary value, but only in terms of the memories they hold for me, like my piano that I wrote about last month, 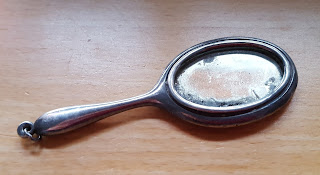 This month, it's a tiny mirror, no more than three inches long. It's in silver, although since it came from eastern Poland, there's no hallmark. The back has pale cream enamel in an intricate and pretty design that doesn't show up too well in the photograph, and I'm afraid the glass on the other side has been somewhat damaged, although you can still just about see through the centre of it.


It belonged to my Polish grandmother, Lucja Szapera and on the right is one of only two photographs I have of her. Looking at that rather pretty, vivacious face, you would never know that her story was not destined to be a happy one. Born into a reasonably wealthy Lwow family (and I don't even know if there were any siblings) she met and married my grandfather, Wladyslaw Czerkawski while they were both very young. She must have thought all her dreams had come true.

Wladyslaw was handsome, charming and potentially rich. He had inherited one large country estate while still a child, and stood to inherit another, the one where he was born. Many years later, my great uncle Karol Kossak, who had been one of his closest friends, having married into the family, told me that he had been 'fond of the ladies' as I'm sure he was.

I met Lucja once. My grandfather not at all. He died of typhus on the long march east and is buried in Bukhara on the Silk Road. Long after the war, the Red Cross found my grandmother and put my father in touch with her. By that time my refugee father had met and married my mother in Leeds, and made a life for himself. Everything the Polish side of the family had once possessed was deep behind the Iron Curtain. The English/Irish side of the family had very little to begin with, but that's another story.

Lucja came to visit us in Leeds while I was still a young child but I have almost no memory of her except as an old and complaining lady who didn't want to be in England and didn't want to be where she was in Poland either. She wanted the promised land of her past. Her health was poor, she had lost everything that mattered to her, and she never came to terms with it.


Before the war, she had already left my grandfather and returned to the city. My father divided his time between the two. I think she had discovered that she hated living in the countryside. She disliked the mud and the flies in summer, the cold in winter. I sometimes picture her as a character in a Chekhov play, longing for something else. Besides, the marriage had not turned out at all as she expected. My sociable grandfather loved the countryside. He read. He liked music and painting. He loved horses. He was always planning some new venture, something to make money. Like so many he was property rich and ready cash poor.

Poor Lucja was discontented and when my father was born, she was fairly discontented with him too, although the picture above still portrays an idyllic existence. He always remembered his aunt Wanda, Wladyslaw's sister, with more affection, although being a very kindly man all his life, he never really elaborated on the reasons why. As for my grandfather - he was already conducting an affair with the wife of a local schoolteacher by the time war put an end to all such distractions and, ultimately, to him.

Nevertheless, my father brought this little mirror with him to Yorkshire, and thence to Scotland, via the battle at Monte Cassino in Italy, along with a handful of photographs and nothing else. I'm looking at it now. The older I've grown, the more I've come to sympathise with Lucja. Some can build a good life out of nothing. My father certainly did. But for others - and for all kinds of reasons we can only guess at - it becomes impossible, the hill much too steep to climb.

Who are we to judge?


Some years ago, I wrote a novel called The Amber Heart, based on my Polish family history. It's only available on Kindle at present, I'm afraid, but if you want to know more about the turbulent history of a family very similar to my own, in eastern Poland during the mid 19th century, then you could give it a try.

Rosie said…
Such an interesting story. I have a few things that belong to ancestors and I always wonder what they were like as people. I had a great, great, great grandfather called Archibald Crawford from Ayr who wrote poems and apparently made people laugh. I would love to have known him. He was an auctioneer and had a village shop which may have been in Maybole!
December 12, 2017 2:46 pm