A Proper Person to be Detained: We have a cover! 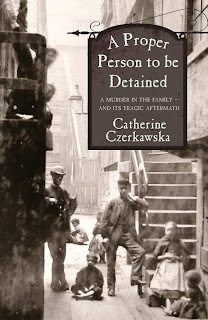 My new book is about a murder in my family. My great great uncle was the innocent victim, dying in the street on Christmas night in 1881.

But the book proved to be about so much more than that. The story involved the appalling treatment of the poor Irish, including many members of my family, who came to mainland Britain, in the mid 1800s, driven by hunger and privation. I researched and wrote about the terrible conditions in which these same people lived and worked, people who were both exploited and damned as 'cheap migrant labour' at the same time. (Ring any bells? It certainly did for me.)

The whole story turned out to be fascinating, distressing, moving, enlightening. I've lived with it for a couple of years now, and I realised, time and again, how seldom the people I was writing about, people who were my family, my forebears, are given any kind of voice. And yet their voices came through strong and clear. I think Saraband's lovely, evocative cover, reflects something of that feeling.
historical non fiction immigration Industrial revolution Irish Irish famine true crime Yorkshire