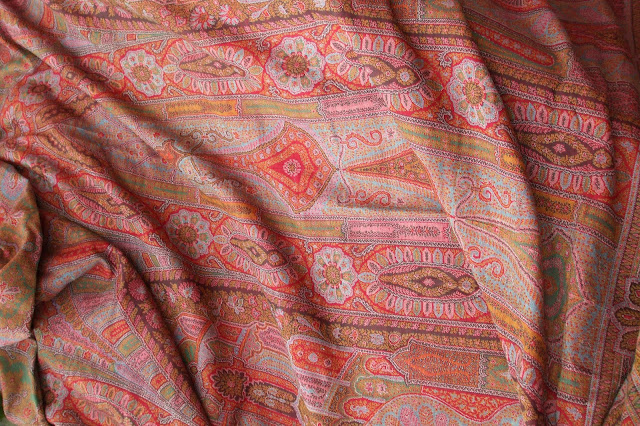 It crossed my mind today - perhaps because as well as writing, I still collect and occasionally deal in old textiles - that our relationship with the rest of the EU used to be like a large, complicated textile: a tapestry or an intricate shawl perhaps. It had taken forty five years of hard work and dedication to produce. It was beautiful in its own way, with many fine elements, something to cherish. Not that it was perfect, because no old and precious textile ever is. Some of it was worn and moth-eaten to be sure. There were little bits of invisible mending but there were still holes here and there. After all, something composed of so many disparate elements needs constant care. Some of it needed fixing. Some of it definitely needed renewing.
But all of that was possible, especially with a certain expertise and a willingness to compromise over methods. On the whole it was still warm and serviceable and it sheltered us from a very cold world outside.
There were lots of these textiles: twenty eight in total. All in a similar style, but with variations to suit the needs of each owner. If you put them together, they would form a wonderful tapestry of differences and similarities.
Then, along came a bunch of people who suggested that this precious thing of ours was past it. If we'd looked closely at them, we might have seen that they were people with a destructive streak. Not artisans or artists at all. But we didn't look too closely. The truth was that most of us had hardly even thought about the textile for years. It was just there. Sometimes we complained that it wasn't fit for purpose. Mostly we hardly even noticed how beautiful it was.
It would be so much better, these people told us, if we dismantled it and started again. Look at all that yarn, they said. Look at how much we'll have when we've unravelled it. It'll be the easiest project in human history, and once it's done, we'll be able to make something infinitely better because we're so clever and and we don't need any lessons in how it should be done. Everyone else will look at our great achievement - all twenty seven of them - and they'll follow our lead and dismantle theirs as well. Easy as pie.
So that's what we did. We set out to unpick and unravel this wonderful thing, this thing that had sheltered and accommodated us for forty five years. We didn't even go about it carefully. What did we need with advice? We knew what we were doing.
We tore it apart, shredding and breaking it in pieces as we went. It was more difficult than we thought, and we kept losing patience and tugging at all the knots and tangles, but by then, it was easier to keep going than to lose face and admit that we'd been wrong.
Now we're left with a pile of broken and useless threads. That big, beautiful textile that was ours has been systematically dismantled on the instructions of a group of people who didn't need it anyway. Too rich, too careless, they always knew that whatever problems might arise, they could throw money at them, and buy themselves a dozen new wraps to shelter themselves from the cold.
And all those other people, with their own finely woven textiles - well, they've seen what we've done and they're appalled. They'll mend what was damaged and move on.
Not us though. We're left out in the cold, with a heap of tangled threads, to sort ourselves out as best we can.
Brexit EU tapestry textiles