On the Beach at Culzean 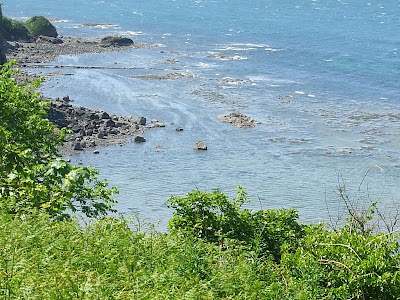 This piece of writing is, if I had to define it, a prose poem. It was published under the title On the Beach at Culzean, in 2009, in the first edition of the Brownsbank Broadsheet. I don't know if there were any more editions, and soon after that, I stopped submitting small pieces of work unless I was directly asked for something, and concentrated on longer fiction and non-fiction instead. However, I came across this today while looking for something else, reread it and found that I liked it. More than that, it made me feel a little weepy. So I thought it would be nice to share it again on here.

The black dog rushes ahead. She is more than ten years dead, but here she is, sniffing along the shoreline, her curly cockade of a tail held high. My son, in red wellies and padded jacket, is walking along the beach, squatting to examine a handful of minute golden shells, prising them up with his starfish fingers, toddler’s treasure.

The shore is a string of pebbly and sandy curves. Arran comes and goes: a grey space, a smudge, a real place, etched against the skyline, Goat Fell cloaked in snow. The sea is audible on all but the stillest of days but in winter it is a muted roar. Closer, you can distinguish the inward rush and outward tug of pebbles beneath the waves. Agates have tumbled in, eggs that shatter against the rocks to reveal a smooth world within a world, a blue and white landscape, sea and sky preserved in stone.

The effect of the cliffs, the woods, is to shield the beaches from change, cutting them off from the land. Up there are narrow paths, leading mysteriously out of sight. Some of them thread through frosted plants and naked trees to the sea. Some of them end in nothing, nowhere, oblivion. Take care.

One winter, a canon blew down from the castle and landed on the beach. On Boxing Day, we took coffee and Christmas cake and climbed down to the empty bay, to sit on the elephantine rocks and gaze at the sea. Grey on grey. We found it half submerged in a pool of water, an intruder in this wholly wild world.

My son has shed his wellies and hooded coat, casting his clouts before may is out. He slides and slithers, exclaiming over each find: fishing net, feathers, sea glass, his voice bouncing off rocks. What creature made these holes? What’s gribble worm? What? Why? How?

In the woods, snowdrops have given place to windflowers, then daffodils, ramsons, bluebells. On the fringes of the park, there are swathes of whin that smell of coconut and dazzle the eyes. During hard times farmers pulped this spiny crop and fed it to their cattle. The whin mill was an upended grindstone, trundled along a channel, hauled by a carthorse. You can see ghostly rings in the grass, to this day. And whin is still hard to handle. Stumble, put out a hand to save yourself and there will be tears.

Down here, the shore is edged by volcanic rocks, stretched and folded back on themselves, wrinkled, with seams of white quartz. There are caves too with ancient fortifications built across, as though the earlier castle had grown upwards, a living thing, rooted in the rocks beneath. Archaeologists have found human bones here. People were born in these caves, spent their lives, died and were buried among the giant spiders that also call this labyrinth home.

On the beach, the storms have left a litter of driftwood behind, sculptures on smooth sand. Out there the air is a mixture of salt and sweet. Ailsa Craig is a sugared cake.

Picnic time. From above, you can see reefs at low tide, with cormorants and shags perched on the teeth of them. They teem with life, these pavements of rock, and the pools between: anemones, barnacles, little fishes, translucent shrimps, sea slugs. Children are exploring the reefs, teasing the anemones, briefly imprisoning creatures in jars and boxes. Look and let go, look and let go, calls the teacher.

We trek down to the beach, staggering beneath our trappings. We make a boat out of sand. My son motors to Arran and back within the hour and the sand holds up pretty well. He and his father and his grandfather commence engineering operations. They dam the burn that trickles down from the hill, dig a new channel, build a castle, divert the channel so that it forms a moat. The whole edifice is decorated with shells and white quartz pebbles.

There are swallows diving above, oystercatchers patrolling the shoreline, wagtails darting here and there. I tuck my skirt into my knickers and wade through soft salt water feeling shells between my toes, then look back and see the men in my life, grown small against the rocks, utterly absorbed in the moment and each other.

The dog follows me, splashing and cavorting. She has found a length of mooring rope, thick and prickly, but it is pinned into the shallows by a stone, and she is pulling and tugging, snuffling and sneezing as the salt water goes up her nose. Up there, behind the theatrical arc of the beach, people are walking among the scenery, wearing unsuitable shoes. You can see the odd flash of colour from a jacket or dress. There are precarious girls in high heeled sandals, tight skirts pinning their knees together.

The air smells of roses.

My son is growing fast. He wears a burgundy waterproof against the rain and a daft tweed hat that suits him, although he will only wear it here, where his friends won’t see. He has given up holding hands. But he still has apples in his cheeks, and a face like a flower, open and trusting. My heart aches for him, for all those leaps of faith which he must soon make. For the tripping and falling. For the spiny shrubs. For the picking himself up and walking on. For the narrowing of possibilities. For the disappointments and the friendships and the loves that are not me. How could it be otherwise?

Geese skein across the sky. The swallows have already gone.We stumble down the path to the sea past the boathouse with its tarry roof. The old dog with her white muzzle trots ahead of us. She comes and goes, a memory in both our heads.

Down here on Culzean beach, the familiarity of these stones, these shells, these grains of sand is comforting, our apprehensions soothed by the relentless thrust and pull of the sea. There is only now.

Behind the cliffs behind the woods there has been a change of scene. The heather is in bloom. The hill is a paisley shawl.

Please note that although you are very welcome to share this blog post, the piece itself should not be copied and shared online without my permission.