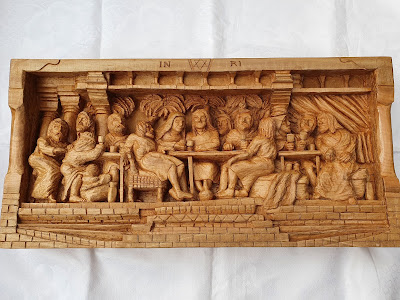 Early on in the Covid 19 lockdown, we decided to seize the opportunity of clearing out our garden sheds and - more importantly - Alan's woodcarving workshop at the bottom of the garden. Because Alan suffers with severe and debilitating forms of arthritis, he had spent some years painting, and had hardly used the workshop at all, except as a place to store tools, and occasionally to cut up a piece of wood for framing his pictures. The result was that it had become extremely cluttered. We took our time, and I did most of the heavy lifting and all of the trundling up and down the garden. Good exercise for me. I don't think we had realised just how miserably neglected the place had become.
If you'd like to see more of Alan's artwork and carving, you'll find his website here.
Buried under a large pile of miscellaneous stuff, we found a huge and beautiful block of lime wood. Many years ago, Alan had been asked by an American customer to carve him a depiction of the Last Supper, and Alan had drawn out the design and started to carve it, before the customer decided that he didn't want it after all. So he had shelved it and got on with other things. Back then, he was making sculptural rocking horses, and doing all kinds of huge outdoor carvings so he wasn't short of work.
Cue forward all these years - it was early summer, and we gazed at the solid piece of wood - some 30 by 15 inches by 4 inches deep. 'Why don't you finish it?' I asked. So he did.

It has taken him many months but yesterday, he completed it. It was very difficult, because the arthritis affects his hands too, so he could only work for a limited time each day. The other problem is that he can't stand for more than a few moments at a time, so he had to find a way of working that meant he could sit down to do it.
Fortunately, our clear-out had also uncovered a useful folding workbench, with a tilting facility, that was exactly the right size   for the carving, and that could be set at the right angle. This meant   that he could sit in his comfortable lightweight folding wheelchair, and work away, getting a little fresh air as he did so.

The year and the carving moved on. It took a whole lot longer than he thought it would. This is a highly detailed high relief carving.

Autumn came and with it the usual, west of Scotland wet, chilly   weather. I suggested that he move indoors, so he commandeered  the conservatory, where he could work in warmth and light. And now, in early November, he has just sealed and finished it with some layers of good shellac.
It is a thing of great beauty. The disciples look as though they are having quite a good time! People keep asking us what we are going to do with it next. Of course, we are hoping to sell it - we need the money - but the price will have to be right. No crafter is ever fully reimbursed for the hours spent on a piece of work, but I'd rather keep this than let it go without Alan being suitably rewarded, especially given his health challenges. And if I'm honest, perhaps because of the subject matter, I for one would rather it went to somewhere like a church, or a museum or a collection where it could be appreciated by lots of people for the minor miracle of craftsmanship that it so obviously is. A friend suggested that it would be good to find an Italian home for it, and I can see what she means. They love and appreciate woodcarving in Italy as perhaps it's never quite valued here.

Meanwhile, we're enjoying it. But all suggestions for its future home, as well as for a woodcarving aficionado with reasonably deep pockets gratefully received!
If you'd like to see more pictures, you can have a look at it on the Love Antiques site. 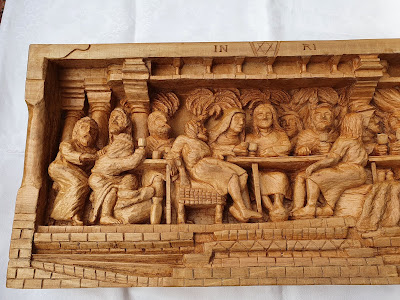