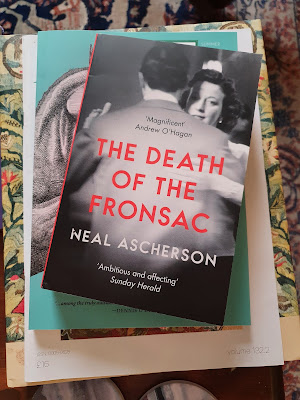 Often, when I'm working on a new book, I actively avoid reading fiction set in the same period, although I always read plenty of non-fiction books around the subject, especially if I'm writing historical fiction and non fiction. Sometimes the 'voice' of a particular piece of fiction is too strong and gets in the way of the made-up voices in my head - and this is even true of non-fiction in which I tend to write narrative rather than academic non-fiction.
But this wonderful novel, Neal Ascherson's, the Death of the Fronsac, is the exception.
I don't know why I didn't know about it earlier. I should have, given the subject matter and the narration, and also given that I admire the writer both as a journalist and a historian. Set in 1940, it is mainly, but not wholly, told through the experiences of a Polish soldier who has found himself in Scotland when his own country has been divided between Hitler and Stalin. It is, as one reviewer describes, an extended and 'marvellous meditation on what it means to have lost a country and a past.' It is a book about the meaning of the word 'home' in Polish more than in English. What it means to lose it, where it resides and whether, once lost, you can ever find it again.
I finished it at 3 o'clock one morning, found myself dreaming about it for the rest of the night, wept over it, and wrote an online review which I knew wouldn't do it justice. My late father could have been the main narrator of this book - he too lost everything in the war and had, if anything, an even more traumatic time. He too arrived in Britain and elected to stay here, in the face of suggestions that the Poles 'go back home' to a home that no longer existed. I think nobody in his new country, even his much loved wife, my mother, really understood how it no longer existed and what his experiences had been. Not back then, anyway, although my mum certainly came to an understanding later. They simply didn't understand the trauma of it.
During the course of my life, so many people here in Scotland have rushed to tell me how much they loved the Poles who stayed at the end of the war. 'Oh, they fitted in,' they'll say. 'Fine people.' I always suspected that it wasn't quite the whole truth at the time. It certainly wasn't my mother's experience in post-war Leeds. This book serves to confirm that it wasn't the whole experience of Poles in post-war Scotland either.
I'm in the middle of researching the history of the Polish side of my family for a new book called The Last Lancer, and I've found more than one Scottish person asking me 'why didn't your dad go back to Poland'? Among much else, this fine book also explains some of those reasons why, in sensitive, detailed and horrifying terms.

The novel also clarifies for me the reasons why my father's attitude to Churchill was equivocal at best. It was an attitude he shared with many Poles. But above all, it explains something central to the Polish perception of 'home', an inadequate word in English, and of the way in which Poles never confuse the piece of land labelled state - and nation.
But what is that nation? What does it mean to be Polish? What, and where, is home, when home has been all but obliterated.

I think about it a lot these days, having recovered my own precious Polish citizenship a year ago. I think about it when, as happened to me recently, a new social media 'friend' posts something astoundingly insensitive, inaccurate and angry about 'illegal immigrants' (And is promptly unfriended - something I very rarely do!)
There are no easy answers, and this is by no means an easy book - but it is still the finest and most illuminating piece of writing on these subjects - and on my own heritage - that I have ever come across.
Enjoyed this post? Never miss out on future posts by following me.
Ascherson fiction Historical Fiction Hitler immigration Poland Poles in Scotland refugees Stalin WW2

Anonymous said…
Hi Catherine,
I have just read this book on your recommendation and absolutely loved it. Thank you. I too admire Neil's writing but knew nothing of this book. It has been a revelation especially since I grew up in Greenock just after the war.
Lin Anderson.
August 11, 2021 9:06 pm