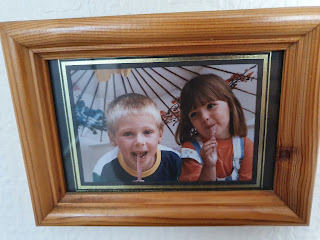 I seem to be writing a lot of posts about roses just now, but they really have been spectacular this year here in Scotland!
About twenty five years ago - perhaps a little more - we had an expedition to beautiful Holker Hall with good friends. That's a picture of our respective kids, before they became all grown up - Charlie and Lucy.
They had got candy canes from the gift shop and were busy sucking away at them to turn them into sharp points, so that they could duel with them, as far as I remember!
It was at Holker that I first saw how rambling roses could be grown into trees and how beautiful they looked. So the following year, I managed to buy a couple of suitably tall ramblers from David Austin Roses: Paul's Himalayan Musk, and another called Rosa Felipes Kiftsgate.
It was ambitious, but we do have a handful of quite tall trees in our cottage garden.
Paul's Himalayan Musk took off right away. It was a few years before it was properly established, but look at it now. 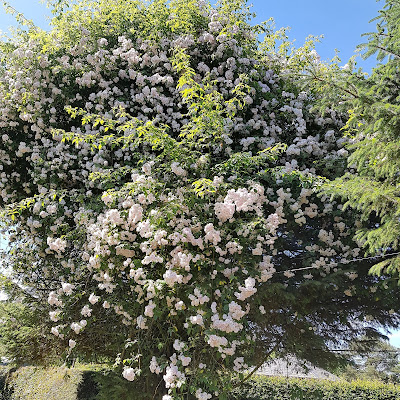 Kiftsgate was different though. It grew a bit, and then seemed to get some kind of fungus. I cut it back and left it alone. It grew again, but not much. And to be honest, I kind of forgot about it. It had been planted in a little shrubbery, with a gorgeous holly tree that grew taller every year. Sometimes I would see a few flowers, and sometimes I would trim back a bit of the resulting growth. Often I would think I should get rid of it, but then I would forget and just leave it to its own devices. The slightly chaotic shrubbery with holly, honeysuckle, spiraea and philadelphus, provides great cover for the smaller birds in summer and winter alike, so we trim it back a little, but otherwise leave it alone.
Cue forward to this year, which has been a bumper year for roses of all kinds. The Himalayan Musk had flowered and mostly died back by last week, when I was standing beside the holly tree and suddenly noticed that here and there were clutches of rosebuds. Lots and lots and lots of them.
Quietly and without fuss, Kiftsgate has clambered up and through the bigger branches of the holly tree - and here it is, twenty five years later, flowering beautifully and almost reaching the top of the holly. When I walk down the garden at night, I can smell the gorgeous scent of it. I can see it from my window as I type this. 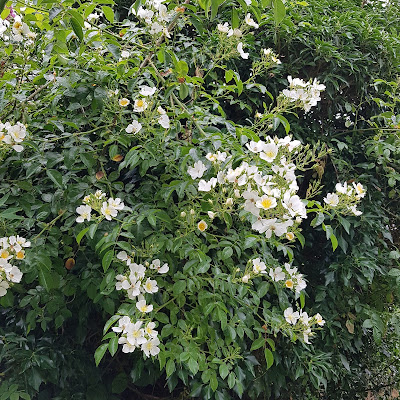