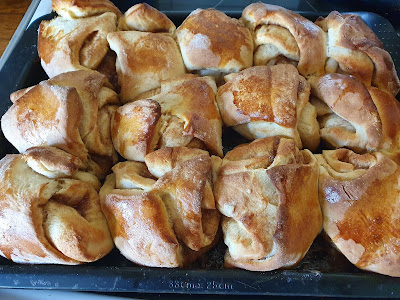 Yesterday, in spite of the heat - it's still warm and sunny in south west Scotland - I baked some Swedish cinnamon buns. They're delicious, and I had to freeze some, otherwise we'd have eaten far too many of them. I'll put the recipe at the end of this post so if you want to, you can skip the small rant that follows and go straight to the recipe!

I first came across these gorgeous Scandinavian pastries when I worked in Finland for a couple of years, back in the 1970s. Then, I forgot all about them until I started reading crime fiction from Sweden, in which everyone seemed to eat them, which made me want some too, so I had to seek out a recipe from a friend.

A few months ago, mid pandemic, our son moved to Sweden. Before that, he had been working in Barcelona for a couple of years. We were meant to visit him there, but Covid put a stop to all that. And then, at the request of his company, he moved to Stockholm. He loves the city and he loves his job, so there are no complaints on that score. In fact I'm delighted for him, because if he was unhappy, we'd be doubly unhappy too.

It would be true to say that Brexit has done him no favours, making everything infinitely more complicated than it need be. But at least, working in video game design, he has skills that are very much in demand.

In the same boat.

However, we haven't seen him for some 18 months now. We are not alone. I could name at least a dozen friends in the same boat. There are people who haven't seen longed-for grandchildren, there are people who have missed weddings and funerals, there are chronically ill people who are desperate for a (vaccinated and tested) visit from a much loved family member living abroad. There are probably millions of us, although nobody knows, because nobody in government, not in Westminster and not in Scotland, seems to care. Nobody seems aware that vast numbers of families have members living elsewhere. In fact it feels like a concept with which most politicians are totally unfamiliar.

We are at the back of a long queue, while the government and the media focus almost exclusively on holidays.

Earlier this year our son booked - and then cancelled - a trip home on 17th July. He had holidays and was planning to spend a week with us, but it wasn't to be. Partly it was that the flights kept being changed. Mostly it was that he had had only one vaccination by then, he would have had to isolate at home with us, which he would have willingly done for the days of his visit. But nobody, not even our - otherwise extremely helpful and obliging MP - could tell us what the protocol was for getting tested. As a UK citizen coming back here, he would have to register and pay a rather extortionate amount up front for two tests, only one of which he would use, since he would be returning to Sweden within 7 days. Nobody could give us any information about how he would obtain the other test necessary for travelling back to Sweden. (Test centres are only for residents, not UK passport holders.) Or what would happen about the expensive but wasted test, meant to be submitted by post on day eight.

Now, he's hoping to come back for a few days in late September, or early October. Taking the bull by the horns, I wrote to the Scottish health secretary, pointing out that even though rules had been relaxed for double vaccinated people returning to the UK, neither Scotland not anywhere else in the UK was prepared to recognise the very same vaccinations, given in the EU. Even though proof of said vaccination would be available.

What I got from the 'operational management team' was disappointing. It was a standard, vague and faintly admonitory email as though I had asked an unreasonable question, and not one that is exercising many thousands of people in the whole of the UK right now. In fact it didn't really answer my detailed question at all. Basically, it said, we know best, best get back in your box till we tell you what you can do.

It surely shouldn't be beyond the bounds of possibility to respond to a concerned citizen by saying that EU and indeed worldwide vaccinations and tests will be recognised as soon as possible and that tests will also be made available while people are visiting family in Scotland. Most people would be happy to pay for them. We don't expect miracles. We don't expect it to happen tomorrow. Just a response that refrains from sending out a bureaucratic finger-wagging one-size-fits-all exercise, recognises the pressing problem and promises a solution some time soon.

If, like me, you need something to sweeten your temper, here's the recipe for cinnamon buns.

I mix it in my bread-maker and bake it in the oven. I use the measuring cups that came with the bread-maker, which I think are very similar to US cups. but this is a very forgiving recipe so as long as you get the relative proportions right, it should be OK.

half a cup of caster sugar

2 tsp ground cardamom (I had run out so I pounded a few seeds and used them instead but you can leave this out altogether if you're not keen on cardamom.)

1 beaten egg plus extra for glazing

I chuck all the pastry ingredients into the bread-maker on the 'dough' setting. This is usually about an hour and a half, but I sometimes give it another half hour or so on the same setting. If you don't have a bread-maker, you can just put the dry ingredients together, add the wet and mix it all in a bowl, kneading it very well in the usual way, and then leaving it in a warm place to rise for an hour or so. It should be very soft, but not sticky. The spices can be variable - you can add more or less according to your taste.

Divide your yeast pastry in half, and roll out one half into a rectangle, brush with plenty of melted butter, and sprinkle with mixed sugar and cinnamon. Then, roll it up, starting on the long side, cut your roll into about seven triangles, pinch each into an ear shape (I'm not very good at this, but they still turn out OK) and put on a well greased baking tray. Do the same thing with the other half. You finish up with about 14 buns and you can put them reasonably close together on the tray. The filling will leak out a bit but this doesn't matter. Leave in a warm place till they start to rise again and then brush with beaten egg.

Bake in a hot oven: 400F or 200C for about 15 minutes, perhaps a little more. My oven is over hot, so I find 175C works better and doesn't over crisp them. Leave them to cool on the tray for a little while before lifting so that any leaked sugar has time to set. Best eaten warm. They don't need butter. Lovely just as they are - especially with a large mug of coffee.

gz said…
Lovely looking buns.
I haven't seen my daughter and twin grandsons for three years now..and she is only in Wales.
Yes, vaccinations that are used here should 100% be accepted here..and the others are all produced to high standards so should be too. Hope your son's visit goes off ok.
July 26, 2021 1:32 pm