My Husband's Extraordinary Hand Carved Chess Set - and the insect bite that nearly cost him his life. 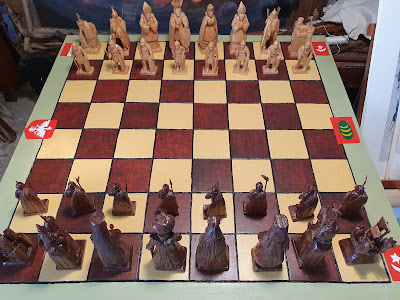 My husband, artist Alan Lees, used to be one of Scotland's foremost woodcarvers, making everything from huge outdoor carvings to gorgeous sculptural rocking horses. Then along came serious arthritis, and even more serious mobility problems. He turned his hand to painting in acrylics, which he could do while he was sitting down, and he has had some success with his work in his unique 'outsider art' style. In fact his work has been described as a cross between Lowry and Bruegel.
But that wasn't the only problem.
Somewhere in the middle of his arthritis treatment, he was in the garden, when he was bitten on the finger by a horsefly, or cleg as they are called in Scotland. At first we thought it was just an insect bite, but within an hour or two, his finger had swollen and he was in excruciating pain. Not only that, but by bed-time he was running a temperature, shivering and shaking. An on-call doctor came out, looked scathingly at his finger and said 'I don't think you're going to die from an insect bite.'
He almost did.
By the following morning, it was clear that he was very ill indeed. Another doctor arrived and - fortunately - called for an ambulance immediately. That small bite had turned into full blown sepsis. The speed with which all this happened was horrific.
There followed a nightmare few months. First of all the wound was drained and he was pumped full of antibiotics. By Friday of that week, though, a consultant breezed into the ward and told him he could go home, before breezing out again. I glanced at the finger and thought that it certainly didn't look too good to me. Alan was still in a lot of pain. The junior doctor who came along to do the discharge paperwork also looked at the finger, pursed his lips, looked embarrassed but was clearly much too scared of summoning the consultant from whatever he was doing on a Friday evening. With hindsight, of course, I should have insisted. 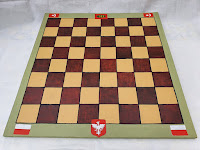 There followed another horrible night of pain and fever. In the morning, I contacted a friend along the road who had trained as a midwife. She came in, took one look at finger and patient and said 'A & E, right now.' You could actually see the infection tracking through his system from the finger.
Back at the hospital, he was triaged by a hugely competent and sympathetic senior nurse, whisked through almost immediately and again attached to mega antibiotics.
There followed six operations on the offending finger. A very fine surgeon, a specialist in hand surgery, was determined to save it, although even she almost gave up and suggested amputation. The problem was that the cleg had injected something particularly nasty into him. The hospital had to do some kind of culture to find out which antibiotics might work. Eventually, there had to be skin grafts to try to restore the finger that had been practically eaten away by the bug and really didn't want to heal. For a time, there were daily visits to the surgeon's clinic so that the special dressing could be changed and eventually, weeks and weeks later, it began to heal.
The finger is intact, and still works, albeit it's thinner than it was, and less capable. And it responds painfully to anything but the hottest temperatures, so he has to wear a modified glove, covering it most of the time. For a while, he thought he would never carve again. 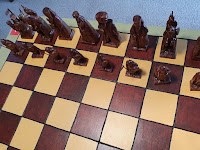 But over lockdown, he set up a small workbench at a slight angle, so that he could sit down to carve and work for a few hours each day at smaller, and less stressful items. He mostly worked indoors, until with the warmer weather he could take it outside for a little while. First of all he completed a spectacular high relief carving of the Last Supper. It took many months, but he finished it.

Then he designed and made this chess set: the Hapsburgs and the Ottomans, focusing on the battle at the gates of Vienna, in which the Polish Winged Hussars played a key role in the defeat of the Ottoman army. 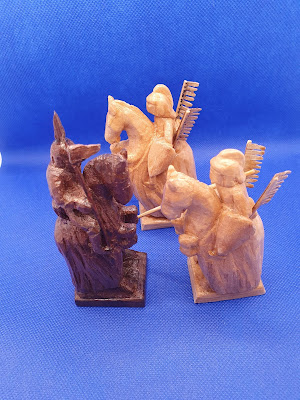 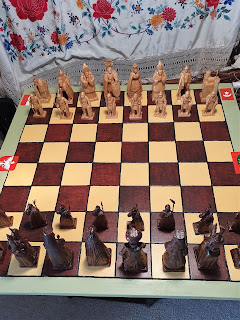 Six months later, you can see the finished item. 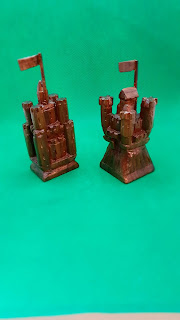 It is stunningly beautiful, intricate, detailed - amazing. The Ottoman side is carved in American black walnut - a lovely hardwood. Alan  found a piece in his workshop that he had been hoarding for almost 30 years! The Hapsburg side is in lime.

The board is hand painted, and the reverse of the board is also decorated.

It's a wonderful piece (or many pieces) of highly original work and although we're a bit reluctant to let it go, if you have a passion for chess and deep pockets, do contact us. One or two people have questioned whether you could play with such intricate pieces - but because it's made of wood, it is actually pretty robust. Nevertheless - I reckon it's as much a precious, one off artwork as an everyday set.

Inspired by this chess set, and how much he loved making it, I think Alan is going to carve more chess sets in the future but realistically, he can only make one or two in a year, these will be very rare items, and will be priced accordingly.

If you'd like to see more pictures, and discover more of Alan's work for sale, including the Last Supper carving, you can go to our Etsy store, the 200 Year Old House. 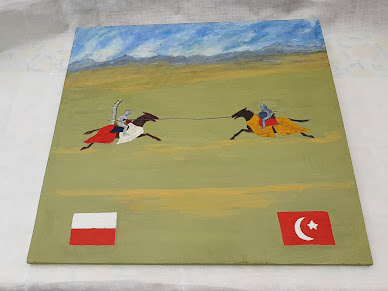 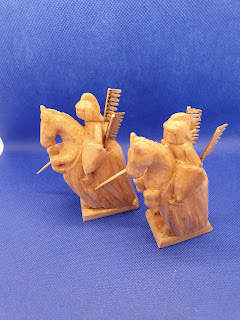 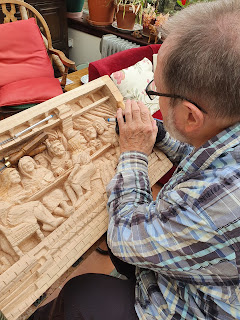 Bill Kirton said…
You know how much I’ve admired Alan’s work in the past - and I still find the chess set and the supper breathtaking, but having lived through this awful sepsis story adds further dimensions to the achievement. Chapeau to both of you.
August 01, 2021 9:43 pm

Catherine Czerkawska said…
Thanks, Bill. I'll pass this on to him. People keep telling us that the pictures don't really do it justice.
August 02, 2021 2:33 pm