Mice Under a Broom 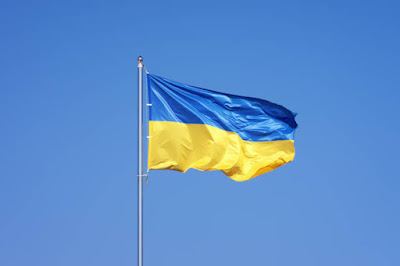 For the past three years, I've been researching the history of my Polish family and its relationship with Ukraine. My forebears, including my father, were Eastern Poles, living in and around the city of Lviv, then called Lwow, that had been under Polish rule for many hundreds of years. But it was complicated. I number Ashkenazi Jews who had fled East to the Polish Lithuanian Commonwealth, and people of Ukrainian Orthodox persuasion among my ancestors. Most of us from that part of the world do. Although our history has been chequered and sometimes hideously violent, the one thing we share is our seemingly intractable problem with our near neighbours. Poles and Ukrainians never confuse state and nation. We are so intertwined as to seem like the same people, but both of us know what and who we are and hope to live in peace, accepting that knowledge.
It is the small things that are on my mind as I write this. The ten year old girl, her life just beginning, killed at the behest of a psychotic old man with dreams of empire. The uncannily round, expressionless face of that same old man, glimpsed in passing on TV, as though even the broadcasters are reluctant to show it too often, like a bogeyman of folklore. The doctor in the Kyiv hospital, staying to look after his young patients, many of them cancer sufferers, as he closes his eyes, briefly, to gather himself together to try to answer another question. How do you feel? The young president Zelenskyy with his family, his face a map of exhaustion and defiance. The women, thousands of them, trekking towards the border, with babes in arms or hand in hand with toddlers, as women have done for centuries, victims of other narcissistic men with dreams of empire. The bewildered young Russian soldiers who thought that they would be welcomed with open arms. The brave people of all ages in Moscow and St Petersburg, risking heaven knows what fate, to protest against a war of aggression they didn't want and couldn't vote for. The footage of bombs raining down on the parked cars of a block of flats where only a week ago people were leading ordinary lives, mundane and precious, coming out of a pandemic and looking forward to spring.
I've been trying to analyse the feeling that keeps me awake at night. It sits like a hard knot at the centre of my chest. I can't rid myself of it. But I think I know what it is. Anger is too mild a word to describe it. It's rage. Pure, white hot, unadulterated rage and I don't know what to do with it. I think about the few members of my family who survived the last war when so many did not. I think about the young, vibrant aunt who died in Bergen Belsen, and my grandfather who, with thousands of others, was stricken by amoebic dysentery, after imprisonment in Russia by another psychopath. He's buried with other Polish soldiers near Bukhara, on the Silk Road. He was thirty eight years old. I think of his brothers, one shot in front of his wife, the other dying of old injuries from a previous battle. The much loved friends and relatives who disappeared, nameless numbers on lists that were lost.
I went looking for a quote for this post, but everything I found seemed inadequate, hackneyed, lame. The only thing that resonated with me was from a book by my cousin Teresa Kossak, who found herself as a child, fleeing Russians and Nazis and trying to find sanctuary somewhere.
'We were' she wrote, 'Mice under a broom.'
Kyrie Eleison sings the Kyiv Chamber Choir. Lord have mercy. The ancient words and sounds of sorrow and supplication combine in this 15th Century Monody. It is also a small thing, but for me, right now, it seems to be the only thing keeping the hard knot of rage in place, manageable. The frailty of the best laid schemes of mice and men. The grief and pain. As our Scottish poet, Robert Burns knew all too well, even mice under a broom have a right to the quiet enjoyment of their home.
Kyiv Lviv Lwow Poland Robert Burns Russia soldiers Ukraine war

Mavis said…
Oh! Catherine. Your words made me cry. I dread to think what this megalomaniac is going to do next and I fear that the sane world will be powerless to stop him.
It's another example of man's inhumanity to man making countless thousands mourn.

Val said…
Beautifully written. I feel the same as you but cannot put into words. My grandparents settled near Lwow and are buried somewhere in Uzbekistan. My mother never forgave herself for joining the Polish Army and leaving them behind. I hope and pray that this monster is stopped in his tracks. Can the Russian people not stop him before he destroys their lives and so many others.
March 02, 2022 5:26 pm

Anonymous said…
This invasion is really horrible. Needless. Greedy. I see that people in many European countries are volunteering to help the refugees. But what will really happen to these homeless people? Who will stop Putin? How will anyone stop him? If Putin is captured, what will happen next?
March 04, 2022 2:36 am

Bill Kirton said…
Thank you for sharing, Catherine. I wanted to say something, anything to confirm the solidarity and compassion I feel with and for all the victims of this ghastly aberration but no words are adequate. Bon courage.
March 04, 2022 12:47 pm