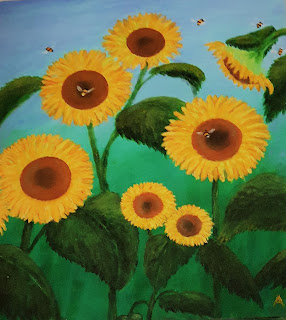 It was a few days ago. I was scrolling through Twitter or Facebook, I can't even remember which, before going to bed. Thinking that I must stop, because the more I see and read about Ukraine the less I sleep.

The feeling of helplessness in the face of monstrous events is dreadful. Yesterday, an elderly lady in our local Co-op stopped me just to express her horror and indignation. Not anyone I knew. She just had to speak to someone about it. We stood amid the cereals and packets of tea, trying to comfort each other.

But it was the short video of the little boy that made me cry.

There he was, walking along a road - towards Poland? Another country? He couldn't have been more than ten years old. He had a good warm jacket on - a jacket that looked nice and new. Bought for winter, probably. He had his little backpack, the kind kids take to school. He was carrying something in his hand - a phone? Passport? He was trudging along with dogged persistence, an exhausted little boy who knew that he had to keep going because there were monsters behind him.

And he was crying his eyes out. Real, terrible, anguished tears.

Questions flooded my mind. As, I'm sure, they did for any other human being who saw him. Was he really alone? Where was his mother? Had he lost his family? Were they just ahead or behind him? Who was filming? Who comforted him, hugged him, tried to make it a little bit better? What happened to him? Where is he now?

It has haunted me ever since. I keep thinking of all the children who had just had Christmas. Who were going to school, playing games, enjoying the ordinary pursuits of childhood in ordinary homes, looking forward to spring.

For the past three years or so, I've been researching a new book, about my family's own sad history in Eastern Europe. And there too were so many stories of displacement, unspeakable cruelties inflicted on the innocent at the behest of evil men. The fact that most such evil men face a terrible reckoning  - as they almost always do - is no comfort at present.

All I can think about is that little lad, trudging along, crying his eyes out.