The Urban Crow Considers Burns an a' that 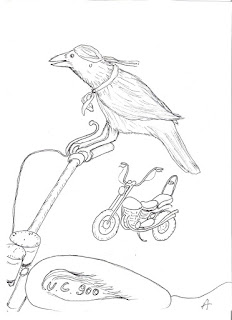 This is posted by special request. Here in South Ayrshire, the birthplace of Robert Burns, we have an annual festival called 'Burns an a' that'. It's supposed to be a festival of 'poetry, music and song' celebrating the life and work of our national poet although poetry never looms very large on the official programme. Somebody who works in marketing once said to me 'Burns doesn't sell' and it's all too obvious that our local council is of much the same mind. The 'a' that' usually eclipses any tiny mention of Burns.
The headline act at 'Burns an a' that' this year was Status Quo, and there was a Harley rally as well. Excellent entertainment - but all suggestions of a 'literary' nature as part of the officially funded festival seem to have been turned down flat. Next year, a HUGE anniversary, 250 years since Rantin Rovin Robin was born, looks all set to have the same omissions. Rab would have recognised the attitude. All of which is background.
Here's the poem!

The urban crow watches television through a shop window
and wonders why a band of ageing rockers
called Status Quo are heading up a festival
named for Scotland’s national poet.
The band seem to be wondering the same thing.
The festival director who looks as though poetry is as
foreign to him as ploughing is declaring
how much Rab would have loved the Quo.
The crow is sceptical, reflects on
how folk invariably presume to
know what somebody would have done or wanted
when attempting to defend the indefensible.
The crow knows nothing for sure
although he decides that a poet who celebrated mice
and sheep but not to the crow’s knowledge
corbies - might nevertheless have
liked to go rockin all over the world.

Anonymous said…
I reckon old Rabbie would have been a status Quo fan personally. Actually I see nothing wrong with acts like Status Quo headlining the Burns n a that festival. There certainly does need to be a strong literary core to the festival but it's also impportant that the festival contributes more broadly to ecconomic and social life in Ayrshire. All too often these types of events can be extremely parochial and of very limited interest to a wider public. It was good to see the Festival having bigger ambitions.
October 21, 2008 12:37 pm

Catherine Czerkawska said…
I've no argument with Status Quo - was once a fan and probably still am! But not only is there no 'strong literary core' to the festival, there is actually no literature whatsoever, neither poetry nor anything else. The one or two readings that took place this year were privately organised and not official festival events. And that, I'm afraid, is a fundamental problem with South Ayrshire Council. Because none of them can imagine going to readings, or possibly even theatre, they can't imagine that anyone else might like to do it!
October 21, 2008 5:34 pm