Ideas, Poland, The Amber Heart and The Winged Hussar 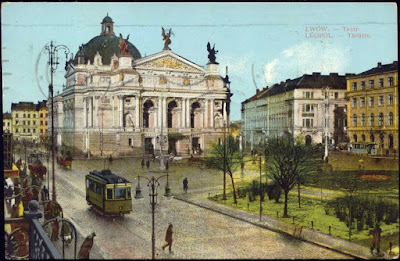 A few weeks ago, I was asked to speak to a group of first year Creative Writing students on the topic of 'Ideas'. It is probably the single most frequently asked question during readings and talks  - 'Where do you get your ideas from?' - and the temptation to reply with suggestions like 'www.ideas.com' and 'Ideas-R-us' is almost irresistible. Well, I did resist the temptation, and I think the session was both productive and interesting - they were a lovely group of youngsters - but I still feel that if you have to ask that question, you may be in the wrong line of business. Most writers of my acquaintance have far more ideas than time to work on them. We all have folders and/or notebooks, stuffed with them. Of course most of these fledgling ideas don't stand the test of time, and are discarded along the way - get tipped out of the nest, so to speak. But every now and then, something stays with you and nips at you until you simply have to do something about it. The ideas are never the problem. But getting started, deciding what shape something should take, finishing, revising, revising again, finding time, finding commitment, finding a certain relentless application, revising for the twentieth or even the thirtieth time - all these can be a little problematic. But not the ideas. They just come and keep on coming.
However, I am currently in a bit of a quandary. My big Polish historical novel, The Amber Heart, is currently with my agent, who loves it, and is about to start sending it out. The Amber Heart has been rewritten to within an inch of its life and we are both very happy with it. It is set in the nineteenth century and is very loosely based on some episodes from my own impossibly romantic family history in Poland's 'wild east'.  I am sitting here with a draft of  a Scottish historical novel called The Physic Garden which I think has potential, but which I also know needs a great deal of work, (essentially, changing a first person narrative to a third person narrative, and adding in several other points of view) before it can be sent out. So I'm wondering whether to do the necessary work on that, because I'm very fond of it, and think I could make it work, before going back to Poland.
But if I go with my heart's desire, what I really want to do is to start writing the sequel to The Amber Heart. This is - again very loosely - based on the story of my grandfather, the grandfather I never knew, who was born in a sleigh, and went on from that somewhat surprising start in life to have a short, dramatic, and also impossibly romantic story. It will be called The Winged Hussar. I have done lots of factual research already, know more or less what the story is, and feel a bit like a diver on the edge of a pool. Once I pass the point of no return, that'll be me for the next year or so. But it will be a big project - I know that it will be emotionally draining - and I need time and space to work on it, which means that I also need somebody out there to have a little faith in The Amber Heart. At present, I'm in a kind of limbo.
And here's the interesting thing. I've been browsing online for pictures of Lwow/Lemburg/Lviv which was the closest city to the place where these people lived, and the city where my grandfather first met my grandfather. Back then it was Polish - now it's Ukrainian. These were deeply troubled borderlands, and that's part of the story. But to my surprise I find that eBay has a number of old, hand tinted, colour postcards of the city, not just buildings, but street scenes, with people, horses, horse-drawn vehicles, trams, from the early years of the twentieth century. I find that I can sit for hours, gazing at these. I'm even in the process of buying some of them. I find them not just fascinating, but curiously moving. They give me a small pain, in my heart, a sense of sorrow, loss, nostalgia. Not sure what the right word is, but I'm fairly obsessed with them right now. It strikes me that any one of these people could be one of my forebears, but I wouldn't know it. That man crossing the street, he could be my great grandfather. In another picture, there's a smart little girl, arm in arm with an older woman, and she could be my grandmother. Those shops, perhaps they visited them. For many years, when my father was young, I was told stories about this time and place, but they were as remote and inaccessible as fairy tales. Now, suddenly, because of the internet, they are real, they push themselves into my consciousness and into my dreams - a thousand stories, begging to be told. I'm obsessed with them. What can I do, but obey? Where do you get your ideas from? That's the easy bit. It's knowing exactly what to do with them that's problematic.

Forthvalley scribe said…
Yes, I know where you are coming from. I feel the same about Waterford.
The Polish novels sound good, but let me tell you I would love to read a novel called The Physic Garden.
November 09, 2010 8:30 am

Anonymous said…
very interesting Catherine. also the postcards. Did you see those really early colour photos of rural Russia that appeared on the internet earlier this year? they were much earlier than anyone knew there were pictures, mid nineteenth century. Pity your friends can't read novels before the long process of publishing formally.
Sally Evans
November 09, 2010 12:56 pm

Catherine Czerkawska said…
Thanks Elizabeth, and yes, Sally - I've been browsing them compulsively, and aren't they fascinating? I only wish my dad was around to see them as well. I once tried posting extracts of a novel (not this one) online, but it wasn't a good idea. But I know what you mean about the publishing process - it takes so long, even when somebody has said yes!
November 09, 2010 10:11 pm