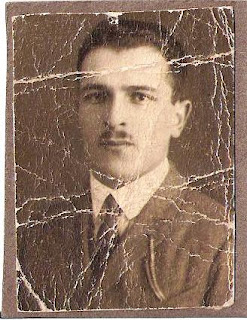 Here he is, my Polish grandfather, Wladyslaw. This little picture of him (looking a bit, I always think, like Olivier, playing Maxim de Winter, in Rebecca)  accompanied my father to the UK, via Monte Cassino, in the later years of the war, when dad was still a very young man. Nobody knew what had become of Wladyslaw, and it was many years later when I began to piece his story together. I am still doing it and it has proved to be altogether more romantic and tragic than almost anything I might be able to make up. One of my father's favourite movies was Dr Zhivago, and - when I began to find out exactly what had befallen my grandfather, and what an extraordinarily eventful, albeit very short, life he had led - I could see exactly why this should be so. There's definitely a quality of that film - with its tale of a deeply attractive man, a beautiful woman, an illicit and ultimately doomed love affair, the demands of family and the tragedies of war - about Wladyslaw's story.
But fictionalising all this - ah, that's where things get a little tricky. I always find, when writing historical fiction, or drama, that there comes a moment when, no matter how much research you may have done, you have to give yourself permission, as it were, to turn aside from the research and dive head first into the piece of fiction you wish to create. But the closer you are to your subject matter, the harder it can be. It is always the rejoinder of the beginning writer, when faced with editorial criticism of a piece of fiction, however mild or tentative, to say, 'But it really happened like that!' Which is, of course, entirely immaterial. As long as there's a certain level of authenticity about a piece of fiction, as long as you don't make howlers that jolt your reader out of their willing suspension of disbelief, the fact that 'it really happened like that' is neither here nor there. What matters is the 'made up truth' of your work. As my agent says, there's always the risk, with historical writing,  that a project will fall between two stools, being neither accurate non-fiction, nor a fully imagined piece of fiction. And the closer you are to your subject matter, the harder it can be to achieve the required separation.
My new novel, The Amber Heart, set in nineteenth century Poland, is finished  now and with my agent,  and I'm about to start work on the sequel, The Winged Hussar. But I'm aware that with this tale, I'm on more precarious territory.
The Amber Heart is loosely based on some episodes from my own family history. The house - called Lisko, in the novel -  was a real house - alas, no longer in existence. One of the characters, in particular, was inspired by an historical character about whom there was a certain amount of material in the public domain, because he was a Polish representative to the Austro Hungarian parliament. And the love story which is central to the Amber Heart was inspired by the tale of a scandalous liaison, related to me by my father, about his own grandmother. But that time and place always seemed so remote, fascinating and wildly romantic, as to be the very stuff of fiction. The resulting novel isn't quite family history - it's genuine fiction, inspired by family stories. With the Winged Hussar, the sequel, however, I am on more familiar territory. I grew up with stories of Wladyslaw. I never met him, but I knew a great deal about him, even before I began to interrogate his life. I met one of his sisters, and spent time with his best friend. I loved him although I had never met him, used to dream that one day, he might turn up on our doorstep. So how to turn his life story into a credible piece of fiction? And how to avoid the pitfalls along the way?
Well, I came up with the idea - and I must confess that I've borrowed this from an artist friend who is embarking on a creative practice PhD - of keeping detailed diaries/scrapbooks all about my research and my writing, not just the usual complicated notes for the novel, but books that will allow me a certain amount of reflection on the process itself and my own emotional response to it. These should allow me to document the reality behind the story, should give me something concrete, which I may even be able to turn into an interesting non fiction project once the new novel is finished. The diaries will, to some extent, anchor me in reality, and allow me to reflect on my own pursuit of this mysterious character who is a part of me and to whom I feel strong emotional ties. But at the same time - I hope - they will also allow me to move confidently forward into the stand-alone fiction that the Winged Hussar must become, if it is to be a marketable and readable novel and a genuine sequel to The Amber Heart.
And I'll post a little of that exploration on here, from time to time, especially where I feel it may help others who may be embarking on similar projects.

margaret blake said…
I can see why you are fascinated by your Grandfather, what a handsome man, as you say he could be Maxim de Winter!
November 18, 2010 9:42 am