My Father, in Poland, in the Snow 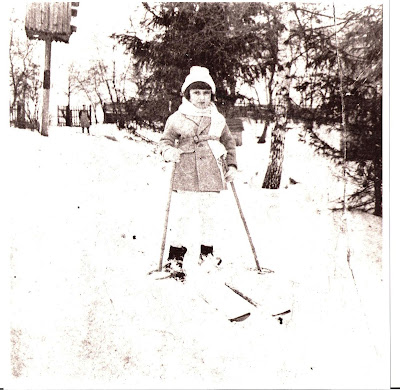 ﻿
I'm spending a lot of time researching Polish history in general, my family history in particular, and just generally feeling my way back into that time and place. I find myself absolutely enchanted by it! It's almost impossible to describe to a non-writer that feeling of entering into another world that seizes you at the start of a project and - with the occasional hiccup when you wonder what on earth you are doing with your time - possesses you for days, weeks, months and just possibly years on end.
That's my father, Julian, in the picture. He was Julian, not the more Polish Juliusz, since my grandfather was an anglophile. Just as well really, given what happened next. Not sure how old Julian was in this picture, but he learned to ski and ride at the same time as he learned to walk. In the UK, where he finished up at the end of the war, these were not really pursuits he could ever resume. Many years later, I remember him pony trekking, here in Scotland, when our son was very small. He seemed as comfortable then, on horseback, as he must have been as a small boy. I'm not sure that he ever tried ski-ing again, although in this picture he's a supremely confident young man. If you look closely, you'll see that there's a man in an apron, in the background, standing beside the tall structure (what is it? I don't know!) and, presumably, 'keeping an eye' on him. 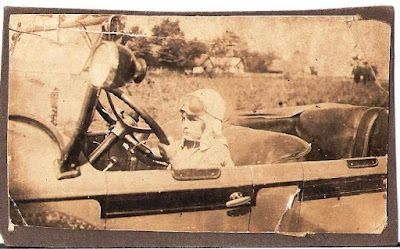 The picture above - summer, this time - shows him at the wheel of his father's car, (I do like the motoring gear, the goggles etc!) In the background, you can just make out a building of some sort, a group of cottages or thatched houses. And again, it's the sense of mystery about old pictures like this that I love. When and where was it. Certainly pre war. Can't you just smell the leather of the car seats? It was the only car in the district and my young grandfather couldn't really afford it, but he bought it anyway. And what is the blurred object at the top right? This picture always gives me a little frisson since the child that my father was looks so like the child that I was!
But of course, his life changed very radically, in the UK. He was a 'refugee alien' by then and such pursuits as ski-ing were way beyond his reach. He had a choice. He could work in the mills or the mines, so he worked in a textile mill for some years, and went to 'night school.' I remember him cycling home on his push bike, when I was a little girl.
He became a very distinguished research scientist, which says a great deal for his spirit, and his determination - considering that he had lost everything, and I mean everything, except a handful of battered photographs to remind him of his past. 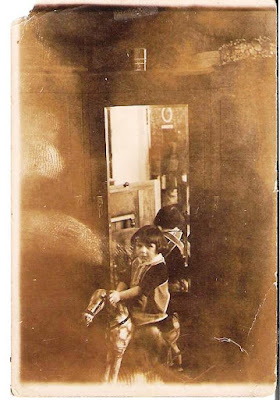