What Would Make Me Go Back to My High Street Bookshop? 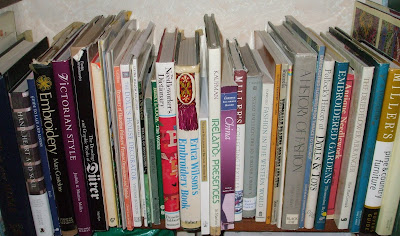 I've always loved books. The way in which this house is positively stuffed with them is evidence of that. Periodically, I decide to have 'a bit of a clear-out'. Then I go to a library or car-boot sale and come home with replacements. I have a big collection of books about textiles and costume, mostly discovered at library sales. They aren't terribly valuable, although they would be difficult to find anywhere else. But over the past few years, I've found myself buying almost all my new books from Amazon, and now I download even more of them straight to my Kindle. I read a lot more but buy fewer and fewer new 'dead tree books'.
Don't let anyone persuade you that Kindle is only for 'light reads'. Actually, Kindle is brilliant for the really heavy reads. I read Nicolas Nickleby on my Kindle over the Christmas holidays, even though I have a nicely bound copy of it sitting on my bookshelves.
It was easy to hold and easy to read. And I felt exactly the same way about this wonderful novel as I did when I was reading that 'real' book. Except that I seemed to read with even more total absorption in the contents, if that were possible.
But on World Book Day, I've been thinking about why I frequent my local bookshop less and less, and what might make me go back to this or - even better - to a small independent bookshop.
Partly, it's where I live. We're deep in the countryside and it's easier to buy online. And if I can't find what I want on Amazon itself, I can usually find it from a small bookseller on the same site.
I go 'into town' once a week on average, but I don't browse around the shops very much because the High Street of our nearest town is - not to put too fine a point on it - awful. It's dirty and scruffy and full of empty shops and charity shops, dog pooh, chewing gum and human spit. You may think that's because people like me no longer shop there much and you may have a point. But it's more complicated than that. Because once upon a time, my husband and I had a small shop in the centre of town, selling crafts and pottery. Our turnover was pretty huge. If we had told anyone at the time what it was, they would have thought we were living the life of Riley. But we soon realised that we were working all the hours that God sent and earning very little.When we had paid everyone else: suppliers, fuel and accommodation for buying trips, astronomical rent and rates, electricity, phone, VAT, accountant, there was almost nothing left over for ourselves.
So after a few years, we got out of it. The customers were there at that time - but the overheads were so vast that the game just wasn't worth the candle any more.
I doubt if that situation has improved.
Our single bookshop has had a checkered past, and I remember when it was the Big Bad Wolf which came along and ousted the lovely indie bookstore, where the staff not only knew all about their stock, but also knew their customers too. Now the Big Bad Wolf is running scared of the even Bigger Badder Wolf - well forgive me if I'm a little less than sympathetic.
A couple of years ago, a friend and fellow writer said  'Is it just me, or do you go into a bookshop these days and find literally nothing you really want to read?'
I found myself agreeing with him. I thought I had got picky in my old age. But perhaps not. At  least at Waterstones they have got rid of the three for two offers where you could never find a third book you wanted. But those tables still tend to be a mix of celebrity bios, cookery books and television tie-ins, the shelves full of a narrow range of heavily promoted titles. And even if something 'different' is well reviewed in one of the Sundays, you can bet you won't find it in your local store. I could name at least three titles I expected to find in my local shop last year - well reviewed books by Scottish writers - but they would have had to be ordered.
So in an effort to be positive I've started thinking about what would make me go back to my High Street Bookshop.
Here's my personal list:
1 An eclectic mix of popular and unusual books: some currently well reviewed titles, plus a genuinely personal choice from whoever is managing and working in the shop - and who is prepared to talk about books to the customers. Maybe even a good deal of 'local' specialisation, according to the siting of the shop. I suppose I'm looking for the equivalent of the local deli!
2 A second hand and antiquarian section - not 'nearly new' books such as charity shops stock - but genuine out-of-print and collectable books.
3 A coffee shop: one that's comfortable, informal and friendly with good tea as well as cakes and sandwiches.
4 Lots of evening and possibly even weekend events (preferably with the coffee shop remaining open and not firmly closed): readings, talks, question-and-answer panels, signings, workshops - in other words, a bookshop as a resource for all those people in the community, and there are lots of them, who are interested in writing and writers and a wide variety of subjects about which writers might write, fiction and non-fiction alike, properly promoted, not just the occasional celebrity piloted in. We already have a cafe in the town which does this kind of thing and does it well - but why not a bookshop?
5 Short queues. In Glasgow's Borders, I often used to browse, take my book to the check-out, take one look at the queue snaking around the shop, put the book down and go home and order it from Amazon instead. 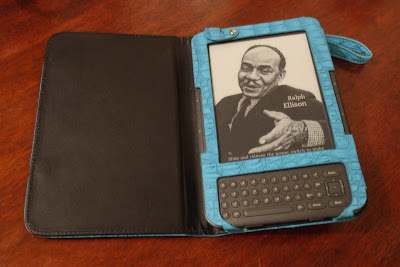 One thing I don't want is to buy downloads for my eReader in my local bookshop. Why would I? Any more than I would buy an app or a game for my phone in a mobile phone shop.
But if my local independent bookshop was truly local - a friendly place, a resource for me as both reader and writer, a place where I could browse and buy old and new books, drink coffee with friends, listen to writers talking about their craft - if they built that, I would most certainly come and carry on coming to it, several times a month.

I'm aware that all of this is what's known as a 'big ask'. But I'm also aware of one or two bookshops and book cafes in Scotland which seem to be doing just this, and thriving.
What do you think? Feel free to add you own thoughts below!
Amazon book buying and selling Bookshops Kindle

Kathleen Jones said…
Oh Catherine, wouldn't I, wouldn't I? Every one of your wish list items is mine. If only there was a book shop like that down the road! Unfortunately I know of only half a dozen in the whole country.
The book trade wasn't destroyed by Amazon, but by a few big booksellers.
March 01, 2012 9:02 pm

Chris Longmuir said…
A lovely thoughtful post and I agree with every word you say. There was a time when you couldn't have prevented me browsing in a bookshop, they were fascinating places. But the fascination has gone because I don't want to be faced by all those celebrity books! No wonder I'm devoted to my Kindle.
March 02, 2012 12:17 pm

Chris Longmuir said…
A lovely thoughtful post and I agree with every word you say. There was a time when you couldn't have prevented me browsing in a bookshop, they were fascinating places. But the fascination has gone because I don't want to be faced by all those celebrity books! No wonder I'm devoted to my Kindle.
March 02, 2012 12:17 pm

Avril said…
As Kathleen says 'if only..' I love this post and the possibilites it conjures. I definitely would want to see local writers promoted including the best of self-published work. As for a cafe that's a must and one where a writer feels free to sit and hang out and of course write
March 04, 2012 6:55 pm

Unknown said…
We've got a brilliant local bookshop on our high street, staffed by friendly, well-read assistants and it's always stuffed with people. I have incredibly mixed feelings about it though, because it's run by Amnesty, who I want to support - I take the few books I can occasionally bear to part with there, but I'm reluctant to buy from them, because as a writer myself it's against my religion to deprive authors of royalties. How mixed up is that??
March 05, 2012 10:39 am

Catherine Czerkawska said…
I feel the same about the Oxfam Shop in Byres Road, in Glasgow. It's a wonderful shop, and always full of people - but doesn't do writers any good at all, except that I suppose if you find an author you like, you might buy new books. (I discovered Alexander McCall Smith this way - might not have bought his Scotland Street books new, but bought one second hand, fell in love with Bertie and bought more new!)But I try, on the whole, to buy out-of-print books second hand. And it does worry me that Oxfam's bookshops are such big business. It's interesting that writers are so bothered by the possibility of piracy of eBooks, but don't seem to worry that a book for which they have been paid a tiny royalty then goes on to be read by many more people, from charity shop to charity shop, without any remuneration at all. Not that anything can be done about it - nor - probably - would we want to. All readers are good readers. But it's maybe one more argument for authors retaining more control.
March 05, 2012 11:36 am