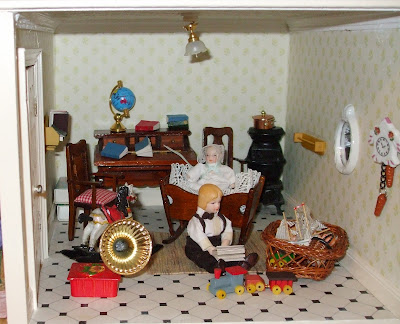 As you can see from the picture above, if you look closely, even my doll's house has books in it! I'm seriously considering making some tiny, bound manuscripts and stacking them on shelves in various other rooms. Maybe the lady of the house - which is my current pride and joy and refuge from all things online - could be a writer in her spare time. This idea occurred to me because I spent a couple of days last week climbing up and down a real stepladder in my real house, my upstairs study to be precise, with a nice view of the garden and the woods beyond. I've been storing folders and box files on a high shelf that runs the length of the whole room for years now, and I decided I needed to investigate and take stock of exactly what I had in the way of material.

With three full length novels, a couple of short story trios and a few plays already published and selling quite nicely on Amazon, I've been considering what I'm going to publish next and what my future publishing strategies might be.  It seemed to me that I had a lot of work just sitting there. Moreover, I suspected some of it might be good work, not just those early 'bottom drawer' novels you cut your teeth on and then hang onto out of sheer sentimentality, not because you think they're any good, but because it's hard to destroy something you've spent so much time on. So I thought it was time for an assessment. 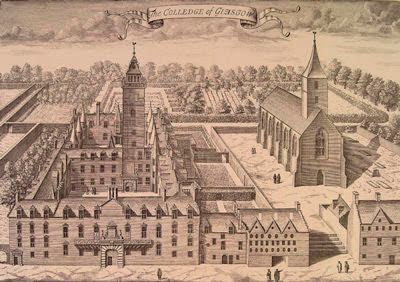 I know that my PC has two (almost) completed but unpublished novels sitting on it. To be more accurate, the novels are on a PC, a laptop, various flash drives and stored in DropBox and on a Norton Cloud somewhere. So - I'm paranoid. There are also printouts. One, called The Physic Garden, is a historical novel set in Glasgow around the turn of the 1800s. It's related by an elderly bookseller who was once a gardener - although he's remembering the events of his youth - and it's a book about male friendship and extreme betrayal. I'm very fond of it. In fact, I think I'm probably more fond of it than anything else I've written. Oh, it definitely needs work. And it needs more words as well as less, additions as well as pruning. This novel was read (I assume) by a young intern at my previous agency. Her response was that it was 'just an old man telling his story.' Which is true. This casual, stupid remark so influenced me that I wasted several months trying to tell the story in the third person.

There was no way that my narrator was going to allow his story to be told in anything except his own strong voice. Now, the possibility of publishing The Physic Garden as an eBook has allowed me to go back to my original plan and make this the book I intended it to be. It should be coming to a Kindle near you before the end of the year.

Also on my PC is a rather odd piece of contemporary fiction called Line Dancing, part romance, part literary fiction. I don't think anyone at any of my agencies ever wanted to read this, for the simple reason that it's about an older woman having a relationship with a younger man and none of the young women and men who inhabit agencies ever found anything to interest them in the proposal. But again, when I reread it now, I get that little kick of excitement that suggests the book is OK, probably worth publishing. And aren't there lots of older women out there who haven't quite given up on love?

That's just on the PC. It was when I started rummaging in all those old folders and files that a pattern began to emerge. I would climb the ladder and lift them down a couple of boxes at a time. Many of them hadn't been opened for years and there were not just cobwebs but dead spiders lurking inside. I had to use antihistamine for the sneezing and a vacuum cleaner for the spider skeletons.

Here's what I found:
First of all, there was a huge manuscript called Salt Sea Strawberries. Many years ago, I wrote a trilogy of dramas for BBC Radio 4, called The Peggers and the Creelers. It was about a Scottish fishing community and an inland boot and shoe making town, (not a million miles from Dunure and Maybole, in Ayrshire) and the plays constituted a densely woven series of dramas about the sometimes stormy relationships between the two communities and the demise of traditional industries. This was well before I ever had a PC. It had been written on an old electric typewriter, and now here it was, printed out on that flimsy old fashioned paper. A huge box of it. 130,000 words of it.

I read a few pages and remembered that the original radio series had elicited lots of fan mail. People had loved it. The novel isn't half bad either. Actually - like the plays - it probably amounts to a trilogy of novels, or it will, by the time I've rewritten it. I don't remember my agent - whichever agent I had at the time - reading this one either. She 'wasn't keen on family sagas. Nobody wants family sagas.'
And you know what? I had forgotten all about it! I hadn't forgotten the plays, just that I had actually spent a year or two of my life writing 130,000 words of a novel based on the plays that nobody then would even look at.

Another folder contained a novel called Snow Baby, a manuscript full of my own scrawled annotations. This is contemporary fiction, literary, lyrical, quite poetic. Extracts from it were published in Carl MacDougall's beautifully designed 'Words' magazine, way back in the 1970s. Which was a difficult magazine to get into. We're talking about a very youthful work here, written when I was supposed to be a 'literary' writer but in reality wasn't quite sure what kind of writer I was. I was a mid-list writer for sure - desperate to tell well written stories that would appeal to all kinds of people, but perhaps to women in particular. The problem with Snow Baby was that it was set in Finland and - you've guessed it - 'nobody wants to read anything set in Finland.'

There were also some 70 pages of a novel called The Marigold Child. This was a novel with an intriguing Mary, Queen of Scots connection. I had done the research and although the premise on which it is based is outrageous, everything fits. My agent's eyes lit up when she heard about it. I wanted to write it as a historical novel, but 'nobody wants historical novels' - or they didn't back then, though they do now - so I spent a year wrestling with it to try to give it a contemporary framework. The 70 pages is set in the here and now. I read it through and thought it read pretty well, spooky, with a couple of engaging central characters, but I'm still not sure that it shouldn't be a straightforward historical novel. That may be what it wants to be. We'll see. The point is that now, I can do what I want with it, not what somebody else is telling me might be flavour of the month. 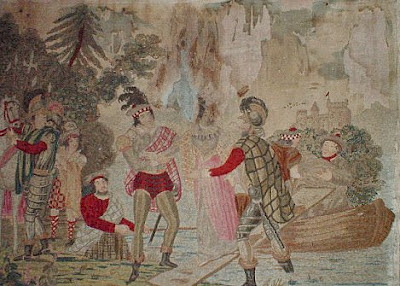 There are besides this, files full of single plays and series with detailed background material. All these were made and produced on BBC Radio 4 and well received. Among them there's a series of plays about a Scottish family of yacht builders, and another set in Roman Britain, all well researched, all vividly written, albeit in dramatic form. By the time these were written, even though I knew in my heart I had material for more novels, I had had enough of soldiering through thousands of words and hoping for the best. There are folders full of detailed ideas and plans for novels, whole plots, meticulously worked out. There are short stories and even some non-fiction pieces. There's a young adult novel - the publisher no longer exists although my television serial on which it is based is still available on YouTube. There's a backlist novel which I always felt was published in the wrong way. Now it seems horribly dated and needs extensive rewriting. But somewhere inside it is a good piece of contemporary fiction - and that too seems a bit like finding buried treasure.

'I wish', said my husband, wistfully, surveying the great heaps of manuscript, 'all this had happened twenty years ago.'
So do I.
But we can only work with what we have and, as of now, I think I just have to get my head down and get more work out there. Lots of it. Once I've whittled my way down the pile I can stop, take stock and decide what might be best to do next. CreateSpace is calling, for instance, since I can't deny that I'd love to have paperback copies of all these.
There's a lot more to come and much of it is already written in some form at least. Editing and polishing takes time - years, probably, but there's an excitement about it all and a freedom that I haven't known for a very long time.
Kindle, other platforms, CreateSpace  - all I can say is, watch this space.

CallyPhillips said…
Yes all that 'old' work and the desire that we were 20 years younger, or had 20 years more or... fascinating amount of work but I'm not going to start putting in my bid for which I want to read first - the good news is, there's a lot I want to read and so get yer head down and get writing. That's what we all need to do this autumn/winter methinks. Polish our buried treasure for all its worth.
August 12, 2012 3:58 pm