A Tale of Two Canary Island Winters, Part One: The Fortune Teller

May 25, 2013
'The world ends where the sea is no longer navigable. There are the Gardens of the Hesperides where Atlas supports the sky on a conical mountain and where the great dragon guards the Golden Apple.' Herodotus. 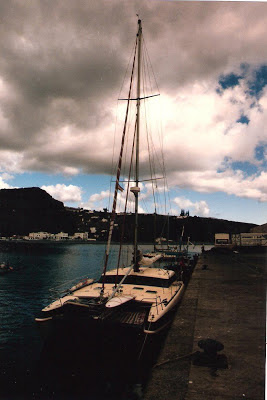 Last week, I reblogged a post from Authors Electric about a trilogy of novels I'm working on, based on an old title. (You can read it just below this post if you want.) I plan to publish the first part in late June - as an eBook to begin with - if I can get my head down and work hard for the next few weeks.

One interesting aspect of working on something I first worked on many years ago is that all kinds of memories come flooding back. It was a magical time for me and now I find myself inhabiting it again. We can't ever go back, but as a writer, you can do it in your imagination. When I'm working, I often surround myself with mementoes, remembrances, evocations of the themes, the background and setting of a particular novel. This can involve pictures and books, music too. I'll watch films which somehow echo the mood of the novel I'm working on, pin up pictures of actors I would choose to play the characters in a movie. Scents play their part (which is why I'm walking about in a cloud of Neroli, right now)  Food, flowers, wine, herbs and spices -  you name it, it all somehow feeds into the project. I suppose it's like making a literary mood board and just as much fun. Maybe it's one of the reasons why I like Pinterest so much. I've started making a mood board for the novel(s) on there too. I know it's displacement activity, but since it seems to result in all kinds of ideas, I find it an invaluable tool for helping me to immerse myself in the story.

One other thing I've decided to do, and I'm not sure whether I'm doing this for my readers or myself - a little bit of both, I suspect - is to write a series of blog posts about two magical winters spent in the Canary Isles, back in the 1980s. They proved to be the inspiration behind several stories and an old novel of which this new trilogy will be a drastic and extended rewrite.

'The past is a foreign country, they do things differently there,' wrote L P Hartley in The Go-Between. Well, that's true, but sometimes it's good to revisit your own past, just to remind yourself of how you got where you are. And since readers so often ask, 'Where do you get your ideas from?' I'd like to say, this is where many of my ideas came from.

It was the 1980s. After university, I spent three years living and working in Finland and Poland, followed by a couple of years working as a Community Writer for the Arts In Fife. Then, I moved in with my boyfriend, into his 200 year old cottage where we're still living, here in the West of Scotland. I was pretty much writing full time, working on radio drama in particular with some television thrown in for good measure, and I was making a reasonable living. An ex-trawlerman and commercial diver, Alan was betwixt and between jobs. He had dipped into retail for a couple of years with a craft and pottery shop. The turnover was high, but not high enough to make it worthwhile. (Everyone else got paid. We didn't.) We were playing around with ideas as to what to do next, were wondering whether to move to the Isle of Arran and had even looked at properties there.

I went to see a fortune teller.

I'm not entirely sure why. She had come highly recommended and I was intrigued. I don't think I wanted to know anything in particular. I suppose I had questions about my career, but I wasn't dissatisfied in any way. Maybe I had some idea of writing about the experience since at the time, I was writing the occasional newspaper feature.

It was a very strange experience, one of the strangest of my life. She lived in a small, quite ordinary house in a small, quite ordinary Scottish town. She looked a little eccentric, but she was kindly and welcoming. She used - as far as I remember - Tarot cards and a crystal ball.  She warned me right from the start that she would describe a random series of events to me but she would have no idea whether they were in my past, my present or my future. Presumably I would be able to tell that but she didn't need to know. She didn't need me to say anything, really. She wasn't claiming to be communing with spirits (thank goodness) so there were no otherworldly platitudes. It was all curiously matter-of-fact but very vivid.

She did, indeed, seem to know some very odd and unusual things about my past and my present including something which was deeply personal, which had happened a long time ago, and which she told me about in some detail. There were a number of other events she described which I didn't recognise at all. Not until much later, anyway.

And then, she said, 'I can see an island. There's a mountain of some sort. Houses. The sea. You're going there. It's going to be very very important to you. Very important indeed.'

Now, we had been wondering about living on the Isle of Arran, had even looked at houses and businesses there. So I said - and any self respecting sceptic would have been proud of me for feeding her useful information  - 'Yes. You could be right. We were thinking about going to live on Arran.'

'Oh no,' she said, very firmly. 'Heavens no. It isn't Arran. I don't know where it is. There are little white houses. The sun's shining. It's warm. The sea's blue. There are lots of flowers. And there's a mountain like a ... ' she hesitated, 'like a mountain a child would draw, you know. That kind of shape. You're going there. It will be very important. In fact, it's going to change your life.' 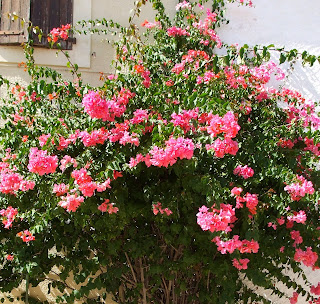 A year or two later,  (the Arran venture having petered out) Alan had decided that he would like to try to carve out a career as a professional yacht skipper.  With considerable seafaring experience already, he quickly gained the necessary qualifications. Then, all unexpectedly, he was offered a job as skipper aboard a 50 foot catamaran called Simba. He would sail the boat to the Canaries in the autumn of 1985, making landfall at Tenerife, where Simba would sit at anchor in Los Cristianos Bay. The company who owned it would send charterers or occasional guests to spend time on board and he would take them where they wanted to go.

We'd been living together for a few years by that time, but in October 1985, we were married. We had our honeymoon in Bath and climbed Glastonbury Tor in brilliant sunshine. Then, only a little while after our return,  Alan sailed south (through a violent storm in Biscay, as it turned out) and reached the Canaries more or less in one piece. Just after Christmas 1985, I flew out to join him.

The sun was shining, the sea was blue, there were lots of flowers, and there was the peak of Teide, like a mountain a child would draw ...

Catherine Czerkawska said…
Thanks, Dee! It's only when I start to think about it all that I realize it was quite exciting!
May 26, 2013 10:26 am