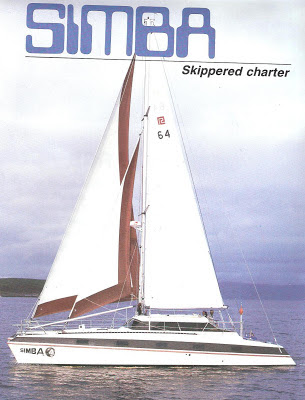 So there I was, on a flight to the Canary island of Tenerife, joining my husband aboard a 50 foot catamaran called Simba, moored in Los Cristianos Bay. Packing had been a challenge. Simba was a big boat but as anyone who sails knows, space on board is always limited and I was going to be there for a few months. Fortunately, the weather was predictably good, so shorts, tops and pretty cotton skirts were the order of the day.

My husband Alan is a very experienced professional sailor which is more than can be said for me. He had worked as a trawler skipper for some years and then as a commercial diver off the West Coast of Scotland. Later, he ran a small business with his brother-in-law, David, diving for clams. Then, he did his RYA training and eventually became a yacht charter skipper as well as spending some time teaching sailing for the Scottish National Watersports Centre in Largs.

When we first met, he and David had also built a small sailing boat called Striker II  (The first Striker had been the clam boat) which they kept in Troon and sailed for pleasure. It was aboard this little yacht that I had my first taste of sailing.
I wasn't a natural. And it wasn't very pleasant.

The West of Scotland waters are beautiful, but the weather is uncertain. I was hideously seasick. My husband, on the other hand, has never been seasick in his life, so doesn't know how horrible it can be; not just the sickness but the general malaise, the intense depression, the awful disorientation. You begin by fearing the boat will sink, start to realize that you wouldn't care if it did and finally you really wish it would. And soon. The only way I could cope with it, when it was at its most intense and debilitating, was by lying flat on my back. As soon as we were in quiet waters, I was fine. Alan may not have been seasick, but he was quite used to people being sick on him. You can't work as a yacht charter skipper for any length of time without people being sick on your shoes and they frequently were.

There's an interesting fact about seasickness. It does go away. Eventually. Of which more in a future post.
Striker II was a yacht called a Seawitch and she was tiny. She would sleep four at a pinch, but you had to know each other very, very well. Intimately. We had a few uncomfortable but frankly hilarious trips - usually to the Isle of Arran for the weekend -  four of us together, myself, my husband, his sister Jackie and her husband David. The toilet facilities involved a plastic bucket, situated under the bunk where Alan and I slept. I still remember Jackie, wrestling with it in the middle of a very rough night in Lamlash Bay - victims of the notorious Lamlash Lop - declaring that this would be her 'last sea voyage ever!' Alan had crewed on and sailed much bigger boats, but even he, presented with the opportunity to skipper a 50 foot catamaran, had to pause for thought. Well, he paused for a few minutes anyway. And Simba was a big strong boat, for which he was mightily glad, as they battled through hurricane force winds on the way south. I was just glad I'd elected to fly instead.

I spent my first married Christmas back with my parents, but then I flew south in early January of 1986. I had never been to the Canaries before. I still remember the soft warmth of the air that hit me as I stepped off the plane into the Tenerife evening. The force of contrast with the wintry Scotland I had just left was acute and enticing. Alan, alone on the boat, had suggested that I get a taxi to the Gomera Ferry Terminal where he could pick me up on the dinghy and ferry me over to Simba which lay at anchor in the bay.That was my first problem. The last ferry of the day to the beautiful island of La Gomera had left (which was why Alan had suggested that he could pick me up from there) but the lovely, concerned Spanish taxi driver didn't want to drop a young woman off there all alone. He kept trying to take me to a hotel instead! With the help of a phrase book, and a few words of Spanish, I managed to persuade him that my husband was a sailor and I was joining a yacht. To be perfectly honest, I may have said to him that my husband was a yacht, but it did the trick. And there she was, our  home for the next few months: Simba.
She was nothing like Striker II.

She was huge. Catamarans (unless they are stripped out racing catamarans) have a lot of internal space and this one was no exception. You could, and we sometimes did, hold a party in her saloon. She had two big master cabins, a captain's cabin, three showers and lavatories, a (disappointingly rather small) galley and that big, comfortable saloon. She lay at anchor in Los Cristianos Bay, amid a cluster of other, interesting yachts, big and small. She was one of the most beautiful vessels in the bay. The air was full of that fabulous Canary Isles mixture of sea air and flowers with a little hint of diesel.
I felt as though the birthday of my life had come.

julia jones said…
Sympathise with the seasickness and regret to say that mine only goes away when I'm in charge of the boat. Rather embarassed about whatever personality defect this reveals.
June 01, 2013 4:42 pm

Catherine Czerkawska said…
Maybe it's the same as driving a car, Julia - you never get car sick then, either! Helming helps, but I still got very sick. It just delayed it a bit. And Stugeron really doesn't agree with me at all!
June 02, 2013 10:21 am